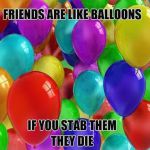 Which downsize first scared you?