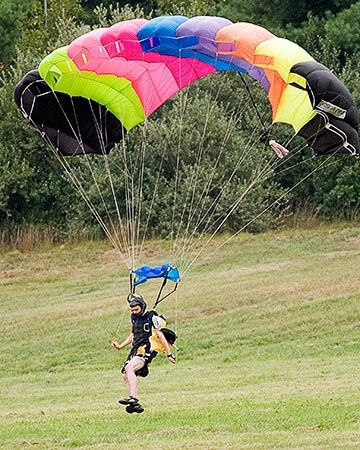 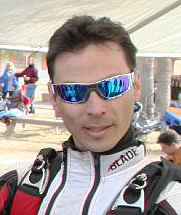 When has Birdman or PF _ever_ pulled a rating from anyone for taking someone out with low numbers?

You have my phone number. Call me and I will tell you if it's that important to you.


On a different note. I have been following this thread and when I actually have some time to sit down and type something longer out I will. A few good comments so far but just keep in mind, you don't know what you don't know and be careful what you ask for, you just might get it.
"It's just skydiving..additional drama is not required"
Some people dream about flying, I live my dream
SKYMONKEY PUBLISHING

July 1, 2009
Response to no one in particular.....
Yes, some kind of across the board standardization is a real good thing.
Make a minimum jump number for WS a regulation-OK, now DZO's can enforce it even.
But I'm just having a hard time comparing the "need" for an "official" WSI rating with AFFI or TI.
Just seems ....well not quite apples and oranges but kinda.......
I'm I the only one having a hard time with the comparison????

Having seen what the boys are working on, I hope we get what we ask for.
JC
FlyLikeBrick
I'm an Athlete?

I hope not. I prefer freedom and am willing to accept that with great freedom comes great responsibility ...
"That looks dangerous." Leopold Stotch

I hope not. I prefer freedom and am willing to accept that with great freedom comes great responsibility ...

Please define specifically how the implementation of a USPA Wingsuit Instructor Rating would restrict your freedom as a skydiver/wingsuiter? Otherwise, it's just FUD, and about as valuable and condescending as saying "you don't know what you don't know."
I'm impressed as hell that the team FlyLikeBrick are endorsing this sort of program, that tells me it's got some significant merit.

I hope not. I prefer freedom and am willing to accept that with great freedom comes great responsibility ...

Please define specifically how the implementation of a USPA Wingsuit Instructor Rating would restrict your freedom as a skydiver/wingsuiter?

A USPA Wingsuit Instructor Rating will limit my freedom to instruct (if I ever choose to do so) ... not mention that a rating will likely be followed by regulations (instead of the current recommendations).
"That looks dangerous." Leopold Stotch

As much as I like Jarno and the FlyLikeBrick folks, a proposal for USPA to regulate wingsuit instruction doesn't affect anyone but us USA folks. So, while their input is appreciated, it's us here who will reap whatever rewards or suffer whatever consequenses. The USPA and FAA have long held a fairly "hands-off" approach for all of us, as opposed to other countries.

So, late in the discussion here, we learn that USPA has "regulating wingsuit instruction" as a discussion topic, and there are multiple groups proposing how such regulations should look before USPA unilaterally regulates us. I hope that the need and costs of that regulation are also on the table.

I can only assume that I've been asleep for months and that FFC folks are lawn-darting into the ground by the dozens. After all, swooping kills 10 or more jumpers a year, and they don't have a formal ratings system. Rated AFF instructors hold on to the student 2 at the time during freefall and require significant air-skills. For us, once a FFC student is out the door, there's little the instructor can do, other than point back to the dz and take pictures. Tandems, AFF and S/L all involve people with no experience and no ability to choose a responsable instructor. FFC students are supposed to have 200 jumps ... that used to mean that person was experienced and able to make intelligent choices for themselves here in the states.

An aside to the folks crafting these proposals ... invite paticipation and you might get some buy-in.

Please define specifically how the implementation of a USPA Wingsuit Instructor Rating would restrict your freedom as a skydiver/wingsuiter?

A USPA Wingsuit Instructor Rating will limit my freedom to instruct (if I ever choose to do so) ... not mention that a rating will likely be followed by regulations (instead of the current recommendations).

Isn't safety of the student far more important than "freedom" of the instructor?

And as far as recommendations turning into regulations... I can't think of one intelligent person on this forum who would say "yes" to a 150-jump wonder asking to jump a WS today. So if we all agree on the recommendations, what is the harm in making them stick, so that DZ's actually pay attention to them too?

It's funny, I am normally a counter-culture anti-rules kind of guy... but really how much would it hurt any of us if we just made people take the current recommendations more seriously by making them concrete guidelines? Nobody has provided a good answer to that question, just vague fearmongering like "be careful what you ask for, you just might get it." Well, we've been asking that sub-par "instructors" and people with under 200 jumps stop making asses of themselves and the rest of our community. Would it be so bad if we actually got that?

Seriously, if I am wrong here, somebody give me a precise example of a negative consequence (to us) of turning recommendations into rules.
www.WingsuitPhotos.com

I think I can address that:

The overall goal is to increase safety for the FFC student. A rating system may do that.

The knowns:
A rating system will cost dollars, time and effort for USPA and participants alike.

Those costs will be passed along to the FFC student.

Instructors unable or unwilling to incur or pass along those costs or obtain the rating will remove themselves from the system.

The unknowns:
What previous incidents would have been prevented by such a rating system?

Will safety for FFC students be increased, and by how much?

There's all this talk about current ratings being given "over a beer" and reigning in instructors who aren't following the guidelines. Do we simply not have the balls to out those folks now (whoever "they" are)? Is calling the USPA to out them going to be easier?

If you think folks used to bitch about instructors making money off FFC's, just wait. If someone is forking out the time and money for a rating, they will want to get paid ... and rightfully so. Tandems and AFF's aren't done for free. Where's VooDoo when you need him?

July 1, 2009
Yeh, but AFF and tandem instructors both get paid. People that want to fly a wingsuit will pay for it... they're gonna pay over a grand for a suit soon anyway.

It's a funny issue for me. It's not important enough that I would go crusading for regulation... but at the same time I have no good reason to say no to it either, if others want to do the legwork.
www.WingsuitPhotos.com 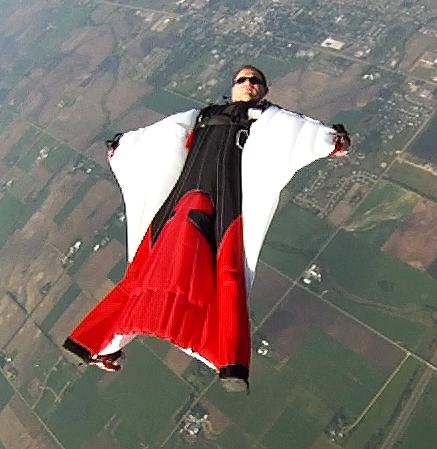 July 1, 2009
This may seem a bit fatalistic and please excuse me if I offend anybody. However, isn't it somewhat of a benefit for wingsuiting to be viewed as a more "dangerous" discipline? Without the presence of death in skydiving very few people would voluntarily take a big bite of humble pie. Consider CReW for example. Almost all new jumpers have heard crazy stories about CReW and how close people have come. When I ask around very few new jumpers want to get into CReW. While death is a horrible result that can occur in the sport, isn't it what keeps the rest of us alive?
I understand this doesn't directly relate to the thread, but it is something to consider as we continue to change and evolve the methods of training and instructing, which in turns affects the attitude towards the sport.
Sky Canyon Wingsuiters

July 1, 2009
People pay money to earn a coach rating too. Spend a few search key moments in the Instructor forums and see how many Coaches are making money for their coached jumps, or are passing along the cost for earning that rating.
Damn few. If you're a wingsuit instructor because you want to make big $$, then you must know something I don't. It'll be a long while til I've earned enough from FFC's to pay for my Intro's in various sizes. I do it for the love of teaching, and the $20.00 a year to renew my rating isn't enough for me to be concerned about. Tell you what, Scott....become a USPA Wingsuit Instructor and *I'll* pay your yearly WSI renewal for as long as you're instructing, because I think you're that valuable to the wingsuiting community.

At this point, it's all FUD. Gee, damn, whiz, wow. Butters is worried that as an instructor, his "freedom" will be restricted. Yeah, it would *really* suck to have to be able to demonstrate you can:
-actually teach so that the student comprehends what you have to share
-actually fly _with_ the student so they can see you during the jump and potentially receive hand signals
-pass a written test of common sense questions that every wingsuit instructor should know.

Damn, that means you'll actually have to prove competency. I can see how that would limit the "freedom" of an incompetent. Which is exactly what a coach rating, AFF rating, TI rating, SL rating, and IAD rating test program actually does. It weeds out those that aren't ready or able.
I can see how those that got their rating over a beer or a lunch are worried about this program going through. I know of several guys that never once saw their instructor during their FFC (including me) or had their instructor flying straight towards them. Those guys can't pass the USPA rating program and therefore won't be able to teach anymore. Good riddance, AFAIC.

Butters is worried that as an instructor, his "freedom" will be restricted.

The first one is an executive summary. It's a good place to start to get the basics. Please do not comment on this document if you do not Read the summary first.

The second one has two parts to it. The first part is the content that would go into the USPA's Instructional Rating Manual. If the organization on that one seems a little weird, it's because it had to match the other sections of the IRM. The second part is the first flight course syllabus.

[For the humor impaired, this is a joke - it doesn't refer to him by his dropzone.com nickname...]

For now it's only a recommendation ...

Again-you want to make minimum jump numbers a regulation-I don't see as anyone would argue the point. Hell, even require "RTFM". (Start with the SIM

But sorry, but I can't help getting hung up on the comparisons....
TI, you're attached to the student.
AFFI, initially you're harness hold out the door with them, stabilize and pull for them if need be..
WS? They've already learned to jump, been doin it-
Yes, you're imparting knowlege to them pre jump,
But reality is even if you're flying right next to them-they're on their own once they're out the door......