September 15, 2009
Anyone who was around a dropzone when Point Break came out will remember the positive influence that movie had on our sport. Skydiving schools saw a great increase at the time, and I used to think, 'geez, if that many people came skydiving because of that, I wonder how many people took up surfing?'

If I recall correctly, Patrick and some of the other actors (but not Keanu Reeves) made some jumps, and he did make some jumps in the movie but was mostly doubled by Jim Wallace. Jeff Jones, Jeff Habberstad, Steve Rahm and Ted Barba were some of the others who worked on the film.

His brother Don was an active skydiver and base jumper, but I don't believe he made any jumps in Point Break. I think Don did do the building jump in the movie Drop Zone, though.

Condolences to Don and the rest of Patrick's family. Unlike a lot of Hollywood, he seemed like a class act.

"There was some sky diving sequences in this film we did together and as filming was going on it came to be that Patrick was jumping out of airplanes all the time. I think he had over 30 jumps during the course of filming and so the production served him with a cease and desist which he listened to until they got to Hawaii. He jumps out of planes and did the flips and falling to the ground and he did it with an open heart."

"He was a beautiful person, an artist. Patrick, he just wanted to experience life and for his work he wanted to take the opportunity of the film and it gave him that sense."

"I can say what I know that he lived life to the fullest. My sympathies and condolences go out to his friends and family."
She is Da Man, and you better not mess with Da Man,
because she will lay some keepdown on you faster than, well, really fast. ~Billvon

"He also did the skydiving scenes himself and the film's aerial jump instructor Jim Wallace found that the actor was a natural and took to it right away.[3] The actor ended up making 55 jumps for the film."

Didn't get to jump with him myself, but maybe others here did. JW

My friend Dave Schulz remembers Patrick's days out at Perris. Said he enjoyed being able to just hang out in a crappy old pair of cutoffs and be accepted as one of the guys. Swayze was a trained dancer, so it's no surprise he took to the air so well.

Two years is a very long hard fight with pancreatic, he really fought it like a man. He even had the guts to make another TV series, which is tough enough when you're in good health. I'll miss him.

I was active as an instructor at Perris when this was going on, never jumped with him but put him through the hanging harness on several occasions and got to know him. A truly nice guy, smoked like a chiminey between jumps, probably nerves, he was a new jumper after all. He was a great student, always thinking things through. His brother Don made a bunch of jumps and had to have a foot amputated after a BASE jump went bad, super nice guy too. That was a fun, magical time at Perris, one could almost call it the "golden age" of skydiving. The movie made huge gains for the sport. He will be missed by many BSBD brother.

The story line was entertaining at best, but the scenes were great and inspired many to have a go at jumping and other life adventures. There are many world class skydivers out there today due to this film.

I too was a part of the "Point Break generation".

Sad to see him go.

Glad that he was here.

The above could be crap, thought provoking, useful, or . . But not personal. You decide.

He fought a tough battle. I hope he enjoyed the experience of life. 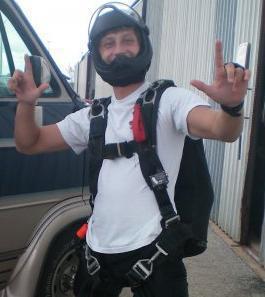 BSBD Pat
Green Light
"Harry, why did you land all the way out there? Nobody else landed out there."
"Your statement answered your question."

I met Don Swayze a couple of years ago when I stopped by Perris to jump just after Christmas. I'll second, third or whatever the "nice guy" accusation.

June 13, 2013
I know this is an old post, but yes both he and his brother were actual skydivers. Patrick was a great guy. I remember when he and the crew were out at PV filming the movie. Actually posted a picture of the Beech that was used in the movie on my FB acct earlier today. He donated a bunch of stuff for the auction we had to help the families of those lost when our twin otter crashed in 92. On a side note... Jim Wallace is a great guy. Enjoyed knowing him back then.