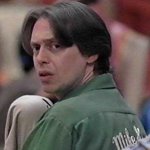 ACL Surgery tomorrow... How bad is this gonna suck?