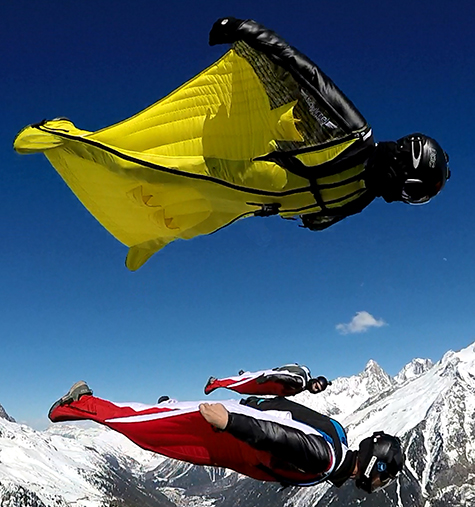 The FUNK is our all-around-acro-freestyle-flocking-fun-relaxed-sporty-skydive-wingsuit-thingy. Actually, we're pretty confident that you can tell what this thing is for just by looking at it. In a nutshell, it's our go-to suit for fun-flying in the skydive environment: the FUNK does it all. This is our answer to the many pilots who have been asking us for a suit that fits in the range between the SWIFT and COLUGO.

The FUNK has been in development since before the SWIFT launched, and during its evolution we gradually fine-tuned the internal pressure, profile thickness, and stance. We have arrived at a planform that yields a balanced and stable feel while back-flying; many of our test pilots have remarked that it is almost absurdly stable on its back. One of our tasks during development was finding a good balance between stability in belly / backfly positions, while maintaining ease of transition. We think that we have found an excellent compromise, and the FUNK features an extra-long arm-wing zip which allows pilots to tailor the internal pressure to their style of flying.

The FUNK's planform necessitates a long and diagonally swept trailing edge on the arm wing, which presents a large opportunity for turbulation as the airflow disconnects here. For that reason, mini-ribs were deemed necessary in the arm wing, but in the end we decided to increase the total number of arm wing cells. This decreased drag at the trailing edge, of course, but also increased general efficiency of the arm wing. These extra ribs do not increase the wing's rigidity – instead, they create a sharper feel when initiating transitions and banking turns.

We're very excited to hear what you think of this new suit. We thoroughly enjoyed the development process and we hope you agree that the FUNK is an awesome platform with great agility, range, and ease of use.