Choose a method of skydiving training

Depending on how much time you have, how much cash you've got to spend, and how strong your nerves are, you have three options for what method of skydiving you'll use for your first jump: tandem, static line, and accelerated freefall (AFF).

These methods vary in that some are designed to give you a quick experience and introduction to skydiving while others start with full blown first jump courses that will set you on the path to becoming a certified skydiver.

Consider your options. Think about the experience you'll get out of each of these and your reasons for doing it. Then pick one. Whichever method you choose to expose yourself to the sport we know you won't regret it. You'll have fun, broaden your horizons and shift your boundaries. 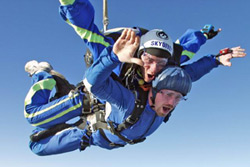 Tandem jumps are a very popular way to make your first jump. They allow the curious potential student to experience, first-hand, the thrills of skydiving without the stress of AFF or SL progression. Most dropzones are set up to offer tandem skydives under two different scenarios: the "one-time fun jump"", or as part of a hybrid training method sometimes called "tandem progression."

The former only requires about 30 minutes of ground preparation; the latter is generally completed after a fairly standard First Jump Course (FJC) which can last up to four hours or more. Tandem jumping, by definition, consists of an experienced jumper called a "Tandem Master" or "Tandem Instructor" and the passenger. The tandem master rides on the back and wears an extra-large parachute system capable of carrying weights of up to 500 pounds; easily able to safely suspend two people. The passenger (or tandem progression student) wears a specially designed harness that attaches in four points to the front of the tandem master. A tandem freefall generally lasts between 45 and 60 seconds, followed by a four minute canopy ride to the ground.

Tandem jumping provides an obvious advantage for the adventurous spirit who cannot adequately meet the physical or proficiency requirements for the S/L or AFF jumps. By relying on Tandem Master's skills, they will still be able to experience the thrill of skydiving.

It should be noted that, in the United States, tandem jumping is conducted in two different modes: as a "ride" by manufacturer-rated Tandem Masters, and as bona fide skydiving instruction by USPA Tandem Instructors who also hold the manufacturers’ ratings. Only USPA-rated Tandem Instructors can teach tandem as a part of hybrid skydiving instruction. In most of these hybrid courses, a student makes three or four tandems and then finishes training starting with a level four AFF jump. The utility of this hybrid method is that there is never more than one instructor involved in any one skydive, thus freeing up staff to more quickly train the student load. Jumps made with a USPA-rated Tandem Instructor count towards student proficiency, those made with a non-USPA rated Tandem master do not. 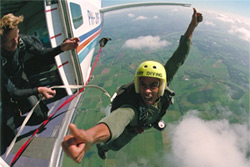 method has evolved over the last ~30 years from its military origins into a successful method for training sport parachutists. The student gets 4-5 hours of ground training and is then taken to an altitude of about 3000 feet for the jump. The jump itself consists of a simple "poised" exit from the strut of a small single engine Cessna aircraft, or the side door of a larger aircraft. As the student falls away from the plane, the main canopy is deployed by a "static line" attached to the aircraft. The student will experience about two to three seconds of falling as the parachute opens.

Subsequent S/L jumps require about 15 minutes of preparation. After 2 good static line jumps, the student will be trained to pull their ripcord for themselves. The student then does 3 more static line jumps where they demonstrate this ability by pulling a dummy ripcord as they leave the plane (the static line is still initiating the deployment). The student is then cleared to do their first actual free fall.

The first freefall is a "clear & pull", where the student initiates the pull sequence immediately upon leaving the aircraft. Next is a 10 second delay jump. Subsequent jumps go to progressively higher altitudes with longer delays. After 25 free falls, and meeting certain other basic requirements, the student receives their A license and is cleared off student status. 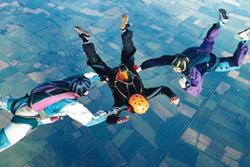 The AFF program was instituted in 1982 as an "accelerated" learning process as compared to the traditional static line progression. The AFF program will give you a true taste of modern sport skydiving. The ground training is a bit more extensive than S/L (~5 hours) because the student will be doing a 50 second freefall (that's right!) on his/her very first jump. The student will exit the aircraft at 10,000-12,000 feet along with two AFF instructors who will assist the student during freefall. The instructors maintain grips on the student from the moment they leave the aircraft until opening, assisting the student as necessary to fall stable, perform practice ripcord pulls, monitor altitude, etc. The student then pulls his/her own ripcord at about 4000 ft.

The official USPA AFF program is a 7 level program. Levels 1, 2, & 3 require two AFF instructors to accompany the student. These dives concentrate on teaching basic safety skills such as altitude awareness, body position, stability during freefall and during the pull sequence, and most importantly- successful ripcord pull. On level 3, the instructors will release the student in freefall for the first time, to fly completely on their own.

Levels 4, 5, 6, & 7 require only one freefall JM (less $$) and teach the student air skills such as turns, forward movement and docking on other people, moving forward, "superman" exits from the plane, etc.

Each AFF level is designed to take one jump, and requires about 45 minutes of training. After successfully performing the objectives of each level, the student moves on to the next level.

After graduating Level 7, the student enters a less structured educational program called the Integrated Student Program, where they jump on their own and with coaches to improve their skills and learn more advanced maneuvers. Once they reach 25 jumps they are ready for their A license. Once they have their A license they are free to jump however they choose, within the dictates of good judgment and the guidelines of the USPA’s Basic Safety Recommendations (BSR’s.)