Indoors Outdoors - Translating Between The Tunnel & The Sky

Part One: Where Are We Now?

Bodyflight has undergone significant evolution over the past few years. There are many tunnels now, with many more on the way - and the very best flying from formalised competitions attracts a great deal of attention from the outside world across the various media that we absorb into our brains every day.

The techniques used to teach flying skills both indoors and outdoors are myriad and complex.

Whether you are brand new to flying or a bit further down the road, the amount of information you are required to process during a short time in a stressful environment can be a heavy burden.

Once you fall down the freefly rabbit hole, flying quickly gets very technical, and although many of the concepts are fairly simple to understand during the briefing - remembering and applying them while you are doing it is a different game.

Indoor flight has taught us how to squeeze every efficiency from our bodies, gradually trimming the fat from the training process to where a lot can be achieved in a relatively short space of time. However, when new to the mysteries of the tube it can be confounding to watch exactly what coaches are asking their students to perform and be left wondering exactly how the various drills and techniques on display are relevant and applicable to one’s skydiving skills.

The articles that follow are designed to clarify somewhat how tunnel flying and skydiving crossover with each other and address some of the questions people generally have at the beginning of the training process.

While it is certainly possible to learn some useful things from articles such as this, there is no substitute for good quality tuition. A coaching fee on top of what you are already paying for tunnel time or jump tickets will likely make things feel extra spendy, but for the amount it costs to employ someone with both the right knowledge and the means to convey it into your head will get you much further than the equivalent cash thrown at just trying to figure things out for yourself.

Bodyflight is evolving quickly and expanding into every corner of the world. There are lots of coaches and many different opinions out there as to what exactly is the correct way to teach things. After reading this someone may well trot up to you and pontificate about how much of an unbearable ass I am and that what I say doesn’t count for shit all. Different approaches work for different people - and the more sources of information there are available to you the better equipped you can be to winnow the wheat from the chaff. I am writing from the position of eight years as a tunnel professional and have attempted to structure these words in a way that represents that which people most want to pick my brains about.

Low Speed, High Speed, and the Follow Me Game

The driving force behind how things have changed is the space available in which to fly. Some years ago tunnels were mostly smaller in diameter. Learning to fly used to be about getting the wind speed up as soon as could be, and that learning moves on lower speeds was a tedium to be rattled through as quickly as possible until you battled your way to head-down flying.

As a general rule, tunnels then started getting bigger and as a result people began to discover a couple of very important things. The extra space meant that not only was it possible to present bigger, flatter, more efficient body positions to the wind - you could do so with more than one person (crucially - a coach and a student) at the same time.

At this point, coaching via leading and following around the tunnel was already a thing, but bringing the format forward to the very beginning of the training process meant that a student could learn more things faster. A coach now had the room to quickly demonstrate something next to the student without more than the very minimum of time consumption and fuss, which is of tangible value in a place where very seconds mean monies, but also when leading and following is added into the process the student would then be approaching all the main concepts of getting shit done in the tunnel from day one.

Following a coach from one position in the tunnel to another and performing structured moves in the same spot that they do engages the key elements of understanding how dynamic flying works. Not only are you practicing the moves themselves, you are learning lines and programming the management of space into your body, coaxing your awareness outwards to the environment you occupy. Good awareness is just as important for safe flying and a healthy learning curve in the tunnel as it is up in the sky. 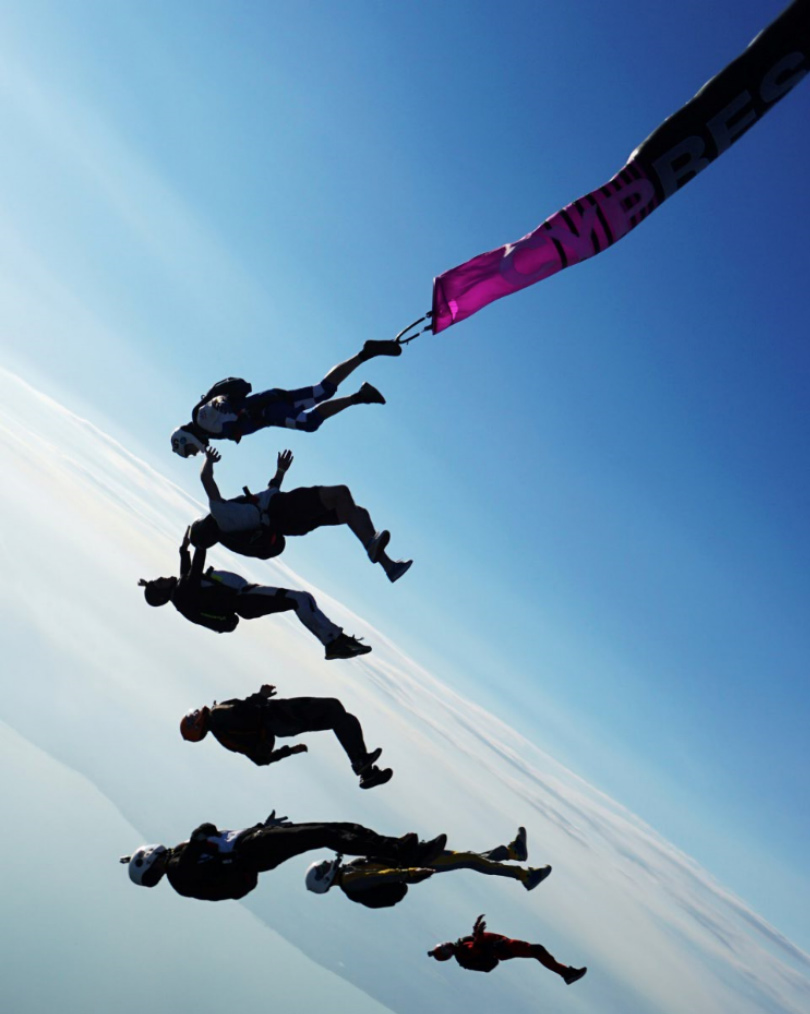 An unsophisticated way to think of the difference between low speed flying and high speed flying is as an indoor and outdoor skill set. In the simplest imaginable terms, low speed training teaches you how to fly all pretty in the tube and high speed training is where you learn skills to be better at skydiving. This is pretty reductive as while these things are not untrue, there is so much more value in understanding exactly where, why and how things cross over. The beautiful part is that the symbiosis between the two ways of doing things is so total that end result is greater than the sum of its parts. If bodyflight has put the hooks in you then chances are you desire to be a good flyer in both the sky and the tube - which is where the benefits really start to show. There are differences between the two environments which reveal themselves the more you learn. Adapting you skills from one place to the other takes a minute and does not happen automatically, but lots of what you learn translates from one environment to the other in valuable ways.

The chapters that follow each represent one of the main orientations in which we fly - broken down into elements where attention is paid to the similarities and differences between indoor and outdoor zooming, and how to approach transitioning concepts and body positions successfully between the two environments.