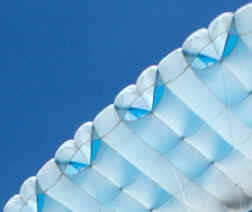 The Xaos-21 is a 21-chamber cross-braced tri-cell canopy and one of Precision Aerodynamics' highest regarded ultra performance wings. One rather analytical so-and-so suggested that "The mysterious paradox is that the Xaos-21 demonstrates the epitome of recalcitrance as it rebels against the authority of the laws of gravity, although it is only by the laws of gravity that this machine flies at its best." Translation: It likes to be loaded.
0
0