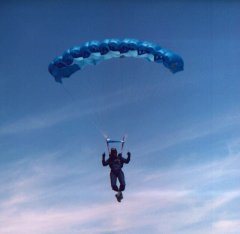 The Synergy is a 7-cell lightly elliptical zero porosity canopy that has been described as "possibly the best all-around parachute that Precision has ever produced." From pitching the pilot chute opening the canopy to pulling the toggles landing the canopy, we have developed a parachute that delivers predictably consistent performance tuned to the styles of both newcomers and old-timers alike.
0
0