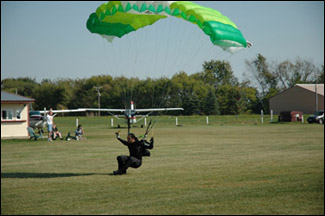 The Samurai is our high performance 9-Cell elliptical parachute equipped with “Airlocks". Based on the Jedei Sweptwing, the Samurai is a versatile airfoil that will please both conservative experienced skydivers, and super-swoopers alike. The rigid feel of the wing is reminiscent of the Jedei, but without the severe “ground-hungriness” that many customers didn’t like. Make no mistake, however, the Samurai will out-swoop the Jedei both in overall distance as well as in softness of the touchdown.
0
0