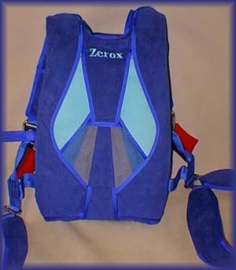 The all new design Zerox, suitable for all types of skydiving. Designed to accept the full range of canopies available on the market. An alternative to a Pop Top type container. Narrow container design, velcro free maintenance, foamed padded leg and back pads for unsurpassed comfort. Stainless steel hardware (3-rings, etc.) as standard. Integrated pin protector flaps. Velcro free main toggles. The contoured yoke, ensures the harness comes over the shoulders and curves inwards towards the chest, preventing the harness slipping off. Options to fit either hip or hip & chest rings. The rig includes reserve freebag, main bag, pilot chute & bridle, reserve pilot chute, main and reserve toggles, main and reserve risers, and is manufactured ready to fit cypres. Design your own rig in a variety of different fabrics and colours with our rig builder. Custom colours at no extra charge. Fabrics available, Cordura, Parapack, Alien Skin, Alcantara and Leather.
0
0