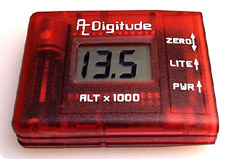 The Digitude electronic freefall altimeter is a totally solid state device, designed specifically for skydiving and other air sports. The altitude is displayed on a custom designed backlit digital LCD display, which is readable under all ambient light conditions.
0
0