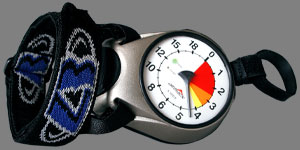 Analog Display with Digital Accuracy
At first glance, the ALTITRACK™ looks like many of the more common analog altimeters used throughout the world... but look a little closer. ALTITRACK™ is the only sport altimeter with an analog face but utilizes the most high tech and durable digital components for accuracy that surpasses every other mechanical sport altimeter currently available.

L&B has also gone beyond the average by incorporating all of the popular features of our PRO-TRACK™ audible and added several new and useful features to the ALTITRACK™.

Imagine a visual altimeter that records your jump information from exit to landing,
has the ability to download jump information to a computer, has an ergonomic fit, is both shock and water resistant, has upgradeable software... and most of all... is extremely easy to use... among its long list of features. You just found the answer you’ve been looking for... ALTITRACK™.