Article on landing wingsuit w/o parachute

January 18, 2010
I drop out of my wing and land it all the time. I call that wing a par-a-chute.
www.WingsuitPhotos.com

I drop out of my wing and land it all the time. I call that wing a par-a-chute.

January 18, 2010
The attached graphic does look more like a hangglider than a wingsuit.
External constructions, hard parts and the body no longer forming the supporting frame for the flyer does make it harder and harder to not see it as something else than a wingsuit.

Something cool and incredible, but more akin to a kite wing. Watching videos of those flying, it seems quite similar to your concept (and is already flown quite high and landed on slopes).
JC
FlyLikeBrick
I'm an Athlete?

January 19, 2010
Well the first thing to realise is that the IGALS landing schematic is a GRAPHIC showing only the essential dynamic of my concept for landing a wingsuit, and reveals nothing of the design of the actual suit. I assure you it is nothing like a hanglider or a kite wing, but if ultimately the argument can be made that the IGALS is not wingsuit, sobeit, I look forward to a new generic name for what my patent describes as " a flying apparatus ".

As the large volume of discussion on this topic proves, a "wingsuit " as it exists cannot be " landed " without serious injury or death, unless some miracle
" landing substance" is pumped wide and deep at the landing site. Hence the need for a new design. Even if landing was not an issue, the wingsuit as it exists is equipment that is far from having reached its full potential- the angle glide is pathetic, the aerodynamics are utterly basic and arbitrary, and the fatigue factor is intolerable. So what in the name of human flight is wrong with a radically new approach to improve a "wingsuit". I would say that if you can slip into the thing, climb into a plane , jump out and fly , its gotta be a wingsuit ?

Anyway, all my work started with a "wingsuit" , and I am also very attached to the purity and simplicity of the idea, its just that one has to move on a bit, and really , 20 years on, a new decade and all, maybe there could be some space made INSIDE " the box " ?

January 19, 2010
Looking at the time thats passed since the GS1 thats made, in terms of slow fallrates, the avg (sustained) speeds have gone down from 40-ish mph to low 30's.
And flare speeds have recently given the first actual possitive climb after a dive (Visa did a few km/h positive speeds for a few seconds in his Stealth2, without jet turbines:).

Wingsuit design is still in its teens, and slowly maturing...but definetely not on a standstill..
JC
FlyLikeBrick
I'm an Athlete?

January 19, 2010
The difference between the Stealth and the GS1 is nominal, and Stealth was a response to " big wing " designs promoted by Tony suits . I recall the ridicule the GS1 was subjected to as being "a garage door " etc at the time of its release, so the "maturing"of wingsuits (since the GS1) have actually been only in the minds and attitudes of the fraternity. Besides for this uncomfortable fact, the real issue in the possibilty of landing a wingsuit is not vertical speed (thats what you have just illustrated ) but forward speed, right ?( oh, and orientation of the body ) So what viable solution has been offered in this regard ? Could one propose diving at 200kms/h just to pull up at the exact moment into " flare" that allows a "climb" within a few feet of the ground, then? a stall , from which you can drop a short distance to land on your feet ? What ?
Landing without a parachute does not constitute progress in wingsuit design per se , but since the parachute hinders progress, perhaps this is not a totally frivolous venture, and progress in wingsuit design definately requires breaking moulds, and will happen in spite of comfort zones .


One more tiny detail: I seem to remember something about landing in water in various suits' manuals. Something like, "don't."

This is slightly off topic, but I would like to comment on water landings with a wingsuit. I have made two intentional water landings with my Vampire 1 in the Blue Hole, which is about sixty miles off the coast of Belize. I had no problem getting out of my wingsuit. I had flotation gear, but I didn't inflate it. The Blue Hole jump is organized by Rich Grimm during the Boogie in Belize in February. Check out www.skydivebelize.com for details. It's a great boogie and Rich has done a nice job organizing it for the past five years.

I like the idea of a huuuuuuuuuugggggggggggeeeeeeee box of styrofoam peanut pack. Not only would it make the landing more spectacular, but think of the fun digging through it to get out.

How about landing in a fields of wheat or a swamp of cattails? Is there any chance extraterrestrials use wheat fields to slow their spinning saucers to soft cushioned landings? How long of a crop line would a wingsuit landing at 70mph leave behind?

What is the highest speed anyone ever reached after jumping off a barn roof into a hay stack (landing without a parachute)? How fast might one drop inside a practically empty 100ft Silo?

The difference between the Stealth and the GS1 is nominal

Though in terms of look, the SM1, Stealth, Ghost, XS etc seem to share a lot of design-acpects with the GS1. Though having flown most of the suits, I do have to say there is some definate difference performance-wise.
When comparing slower fallrates and especially forward drive, aforementioned suits all seem to perform a bit better than the GS1.

I think its mostly related to the wing design.
Im not sure if that was the case with the GS1, but the hanging person under the wing (in wingsuit design) seems to limit the suit, once fully spread, to form a completely smooth underside. Causing air to bleed out from under the legwing/armwings. Not properly putting the pressure/power on.

Instead of a flat wingsurface, it felt a bit more like the hull of a boat (be it greatly exaturated).
The 'hanging' legwing attached to the heel, seemed to cause problems putting propper pressure/drive onto the wing in designs made by Birdman/Tony (who called it the Mercury wing if I believe), or at least did in one of the earlier Blade prototypes we flew. Even a fully outstretched leg ment the legwing was still slightly pointing up.
Having the legwing on the 'front' of the legs, where its able to almost go into de-arch when the legs are fully stretched, is where it seems to create a more powerfull drive.

I definately think the GS1 was one (if not THE) first 'big surface' wingsuits. And do think it was key in initializing a line of thought/public image that enabled TonySuits to succesfully create and market these bigger wings. Which PF, FYB and BM also followed.
Which also goes for the 'drop in' zipper style rigging (although I believe the S-Fly was actually the first one with that feature)

For newer Jii-Wings designs, I do encourage you to take a good look at the more recent design improvements done by each manufacturer. As there is a noticable difference, (especially cellpressure/inflationwise) seen in more recent wingsuit designs, thats definately a big improvement in many ways. Strength needed, and lack of flapping being the 2 most important ones related to that.

In relation to a canopy, a 15 mph flare already looks like level flight/climbing, Visa however managed several (GPS data validated) horizontal flights last week on his Stealth2. And even climbing with speeds of 4km/h on a few jumps (all after massive dives). Which is (I think) the first time we're actually seeing proof for this type of flare. And people are getting equaly impressive results (be it not always with actual data) from other suits.

Comparing it to the GS1 (and suit performance in general, from a few years back) it really does show a significant increase in suit performance in the 'slow fall' arena. Which makes me believe we are still not at the peak of wingsuit design in its current state.
Though for sure, other design directions are currently being explored.
JC
FlyLikeBrick
I'm an Athlete?

People still refer to big suits as 'tarp', 'carpet', 'garage door', 'sunblock', 'matras' and more silly terms. So not much has changed there

So the "maturing"of wingsuits (since the GS1) have actually been only in the minds and attitudes of the fraternity.

Id even say the opposite. I think in part it also created an awareness that you 'need' a big suit to fly a certain performance. And it has created a market where people will rather upgrade their wingsuit, than honing their skills with more practice.

Big suits can be an amazing thing in the right hands. Though at the same time, for a beginner can be a severly limiting factor, in learning to fly his/her body properly. Especialy for lighter people..
JC
FlyLikeBrick
I'm an Athlete? 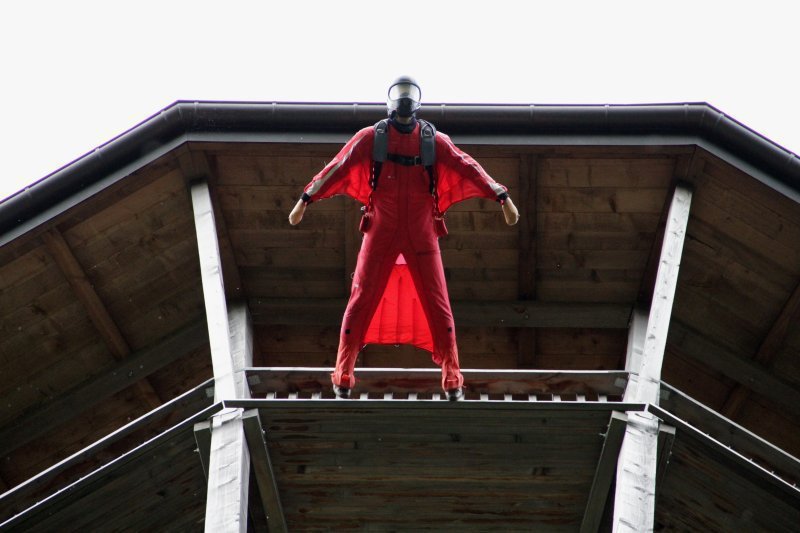 My idea is that the "landing gear" is a key factor, such as the preparation of the project. The "step by step method" proved to be a good one for my personnal projects so far. So here is the idea: the one who masters the sliding on a steep ski slope at very high speed and can take-off a wingsuit, will be able to land as well. So why not take the challenge by this angle? Then you can try to land after a jump from a ski jump (like the ones i've visited this summer in Norway: small for beginners, big for experts. And btw, how fun it could be to play with a wingsuit from a skijump, with the same risks as for ski jumpers, without a plane and a parachute!)... ;-)

Then comes the part where you increase the speed and altitude of the start of the jump.

November 2, 2010
Doesnt look like he generated near enough speed to produce any lift. Cool idea, but im guessing its gonna have to be a much taller ramp. Thus the risks increase.

And um, was he flapping his wings at the end lol.