thinking about buying container for my BASE canopy.question?

November 16, 2006
hey if you read it. i was not being an "A" hole. i was just saying that what i was trying to do was simulate as close as possible.... blah blah.
i was just pointing out that it's not out of the realm. I was being funny about how CREW scares me. also followed it back up with another re-reply of understanding where he was coming from.
i have not even been doing this 2 years. so i know what i am and what i'm not.
he just stated he said what he said because i didn't put any profile stats down. and i said why (people being all about jump numbers etc.). and then i wrote out my profile stats. and then.....

you took me out of context a little. that's ok. i do this just for fun. i don't take anything too seriously.
and i don't disrespect those who came before.

sorry you took it the wrong way. but if you read everything..... take it easy and later.
NPS SUX ASS

November 16, 2006
I'm going to reply on the off chance that you're not a troll, though I suspect that is a possibility.

People are "all about jump numbers," as you put it, because these numbers can often (though not always) offer a fairly good approximation of ability and attitude levels. Those with between 100-500 jumps are in a dangerous time when they have just enough experience to think they know it all, but not enough to realize they don't. It is similar in flying. There is a reason that the time between 40-250 flight hours is called "the killing zone." It's why one's second year in school is called the "sophomore" year. It comes from the Greek words for "wise" and "stupid." There's a natural human tendency, more pronounced in males than females, to go through this phase. And I would bet dollars to donuts you're a young male.

I was being funny about how CREW scares me.

So in other words, you expressed abject ignorance about another discipline in the sport, and thought that was amusing.

i have not even been doing this 2 years. so i know what i am and what i'm not.

If you've only been in the sport two years, it makes it that much tougher to truly know what you are and what you're not. As time goes on, you meet more skydivers, hear more stories, and pick up more information, both good and bad, to round out your understanding of this sport. Two years into it, I thought I had a good idea of my limitations too. And actually, I probably did, looking back. What I didn't have was the gut-level knowledge of what I knew in my head. It took several years of jumping and several hundred more jumps for the words of another jumper to fully sink in: "You can do everything right and still die."

i don't take anything too seriously. and i don't disrespect those who came before.

Look, this sport is FUN, no doubt about it! We skydivers are fun people and we all do this "just for fun." And the reason we get to geek the camera, crank out a gazillion points, fly in inflatable rafts (or on an inflatable doll like I got to!

), zoom through fjords in wingsuits, watch students' faces light up when they figure something out in midair, shoot accuracy in the dead of winter onto a ski slope, feel the rush of building night formations, and tell all these great stories around a fire is precisely because we are serious about a few things.

I'm a fan of ravens and I like your quote. Here's some related food for thought:

“Does wisdom perhaps appear on the earth as a raven which is inspired by the smell of carrion?”
-Nietzsche
"You guys should just do CRW. There are so many more ways to get killed, it makes a CYPRES seem safe." -Kevin Keenan 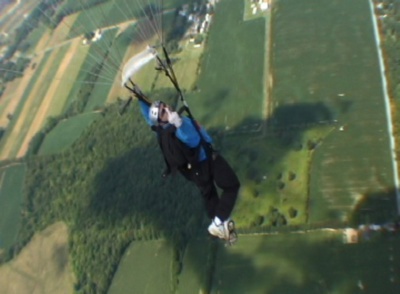 You could be right, but I think he means that he doesn't another mentor because he already has Apex as one.

Gunnery Sergeant of Marines
"I would like it if I were challenged mentally at my job and not feel like I'm mentally challenged." - Co-worker

no matter what i say or how i say it. even alittle sarcastic statement. i'm going to get slammed. i didn't write anything to hurt or belittle anybody. i don't know it all and when i jump/fly/fall or whatever i always make sure to think and watch for others.

these forums are kinda funny in that people tend to read into something you wrote the wrong way. or take it way to personal or whatever. i didn't come on here to upset anybody. i just needed some help and was taken a ltttle off coarse by my sarcasm. (dude have you ever even....blah blah blach) and following up with CREW scares me. hey it really does! i really don't like being under canopy that close! that's not disrespect that's giving a compliment to someone who's not affraid of being that close under canopy. i know people who do CREW. and hear about getting wrapped up!

and the not taking "it' too seriously thing. i just mean in the sense of: besides safety of others. i just don't get to wrapped up in the politics of everything having to be this way or that way. it's just not fun. i only want to have fun like i think we all do.

so could we please put this to rest. i was sarcastic. not being mean.

hey i just meant that i all ready had a mentor in APEX BASE. i took my first jump course with them. i think the other person was concerned that i didn't have any BASE experience. so i was just saying i've had some and a mentor.

i really don't want to get busted up. though some say it's only a matter of time in BASE. i'm sure there's something to that. i've only been hurt once. very recently. (my ankle--jumping in strong wind) i made a mistake. and now i want to correct it by skyiving my BASE equipment more (canopy work) and work on some other stuff. and of course make better decisions than some of recent ones. like jumping in strong wind. and not making it to the already tiny landing area and landing somewhere i didn't want to (and messing up my ankle) . or doing solos in areas without phone reception. etc.

November 19, 2006
again you hit it on the head (and cwn did as well)! by the way i ended up getting a Dolphing d6 container and a raven 3 so i could do what i wanted to do. and thanks again for the pm's.

January 22, 2007
If you want a container for a big main and a small reserve check Atom Axis from Parachutes de France which is designed for classic style. I guess you can even throw a 280 main and a 120ish reserve in it. It has such an aerodynamic shape even with a huge main. Get the open corners done by your rigger and at the end you may end up with a big nice skydiving rig to fly wingsuits plus using your base canopy! And if you go for some CRW after the flight it would make a really awesome jump.