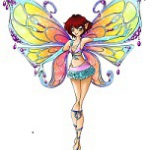 How different is free-flying in the sky compared with tunnel?