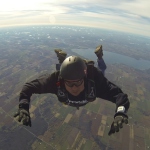 By Lawndarter, November 19, 2015 in Safety and Training