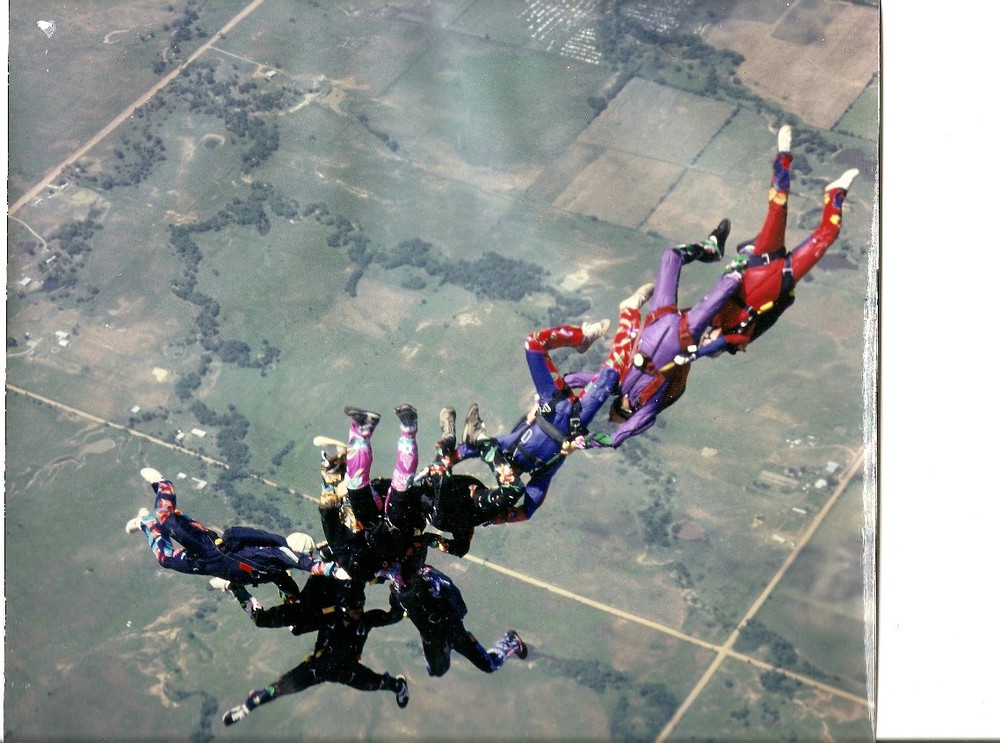 April 25, 2006
I met Bobby Frierson back in 1977. I was at AIT training at Ft. Gordon, and started my jumping career at Barnwell. Bobby and Monica became good friends of mine. Those times at the drop zone were some of the best times I ever had in my life. I can remember the time Rick Sands went out too far on the wing of the Lockheed !!!! After I left Ft. Gordon, I was assigned to Germany, and I never got to see Bobby again after that. I heard that he had a stroke some years ago.

In 1977, we (the Barnwell gang) flew up to Raeford NC for the 4th of July. I was at that time only doing 10 secods FF's. I got up early one morning, and was looking for my JM to take me out before the "crowd" got up. They were loading up a C-172, and there was as slot open, and someone asked me if I wanted to go up, so I hopped on. Well, long story short, the plane was going to 7500 feet (30 second FF). I was too afraid to say something, so I just went out with them. I just went out and did a nice stable FF, but didn't get in with the others. Bobby was waiting for me when I got there. After he lectured me about jumping when I should not, from altitudes that I shouldn't..without the proper SAFE supervision...he told me I flew good and he suited up, and took me to 12500, and taught me how to do some basic RW. What a great weekend for me !

I have not jumped since I tore my knee up playing softball. I miss jumping, it was the best of times for me !

Now that I am in full fledged middle age, I raise and train Clydesdales !

I will never forget Bobby. I got to Ft. Gordon, GA in 1976 and sometime after that became president of the parachute club. I was a jumpmaster and was allowed to instruct the first jump course under the supervision of an instructor. Bobby came to my first first jump course and told me I could teach under him. I would train the new students and we would go to Barnwell to jump. We had so many great weekends jumping there. On one of our jumps from the Lockheed Bobby flew around for a long time. I was sitting behind the pilot's seat and had no idea what was going on. Finally we jumped out for an RW jump. When I opened my PC I had no idea where we were. Another guy on a PC and I landed and walked a long way through a couple of fields. When I finally got to a road we got a ride. I asked the driver where is Barnwell. He said about 16 miles from there. I said where are we? He said Blackville. I asked if he knew Bobby, he said no so I asked if he knew a guy who had a runway in his back yard. He said he did and took us there. All the guys with squares were waiting for us there. I told my son about that story (he's now a tandem and AFF instructor). When I looked up Bobby I learned that he had died. I called Gene  Paul Thacker, who I flew for in Raeford, and told him I was so sorry to hear about Bobby. I said that at least he died doing what he loved. Gene Paul was very upset that he had been jumping after his stroke. When Gene Paul died I called Tony to tell him how sorry I was to hear about Gene Paul. He told me that Gene Paul had suffered for two years with COPD. If it was me, I prefer to go skydiving.

Some old pictures of Bobby and the Lockheed from 1977-1978 time frame.