I just talked to Lew -- needed to ask him about something else.
He went to "the vault" and took out logbook #4.
He confirms that the "A Sport is Born" jumps took place July 13-20, 1960; he returned to Hemet immediately after shooting was over.
He who neener, neerners last, neener, neeners best. 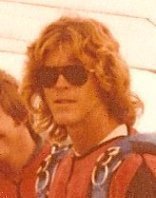 He was definitely later (early 1980's), but Tony Loper used to jump at Spaceland with video; the unit mounted on his belly and the camera on his helmet.

A lot of stuff.


Here is a pic with Tony's "lot of stuff" in the background. Tony did some good work, and at the time it seemed a step up from a helmet mount 16 mm movie cam, especially because we could re-live the jump that evening...

February 11, 2008
my first camera I had to crank a handle on the side to record

NOT hahahaha
Good question though
When did Tom Sanders start? Or the Rip cord guys
"been around, seen some things, slept in dumpsters got high with kings
KR

February 11, 2008
Check out this web page
http://www.soc.org/opcam/11_jj98/mg11_skydvng.html
"been around, seen some things, slept in dumpsters got high with kings
KR

Who? Bill Cole (chuteless) on his 22nd jump

The lump opposite the camera is indeed a counterweight.
If some old guy can do it then obviously it can't be very extreme. Otherwise he'd already be dead.
Bruce McConkey 'I thought we were gonna die, and I couldn't think of anyone

February 19, 2008
Not sure if I should start a new thread for this but here it is. Anyways for your consideration...

As you all know Al Frisby passed away a few months back and I am helping his daughter Stacy with the disposal of his worldly possesions. Among the items found in the loft was this Akai Portable VCR setup with camera and helmet. I have been able to make everything light up and run but there is no RF out so it needs to be looked at by a technician. I am not sure what should be done with this thing. It comes with 10 video tapes and one seems to have video on it. It seems that this equipment must have belonged to Dick Pedley as his name is on the front of the camera helmet. Does anyone have any ideas what I should do with this? Anyone know Dicik Pedley or his family? Pics included...

About Tom Sanders. He was video taping 1st jumpers from the DC3 using a JVC system in 1981 if I remember correctly. It had a seperate recorder that mounted on your chest and a camera on the helmet like this one. Maybe he will chime in. I have two photos of him using this system on my first and fifth jump.
Green Light
"Harry, why did you land all the way out there? Nobody else landed out there."
"Your statement answered your question."

February 20, 2008
I doubt anyone will consider taking this on in an attempt to make it work. I suggest you might donate it to the National Skydiving Museum (not yet in physical existence but nevertheless collecting material for future exhibit.) There are already cameras from other pioneering movie/video people in its collection and I think this would be welcome.
If you're interested in how to do this, please PM me. 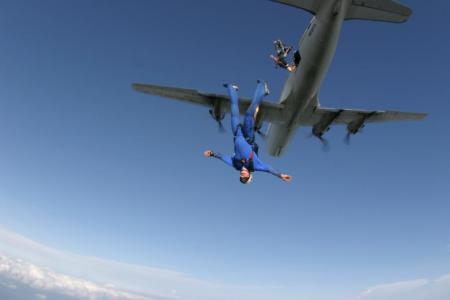 February 20, 2008
Maybe this was already covered but Mike Swain in his very entertaining book Endless Fall goes into great detail about gun cameras. He talks about finding a surplus cache of the highly coveted 12-14 volt (instead of standard 24-28 volt) versions. He also mentions lens adaptors, frame rate changes and other mods. The camera flyers of those days risked serious neck injuries if they had a slammer. They carried some serious weight up top.
2018 marks half a century as a skydiver. Trained by the late Perry Stevens D-51 in 1968.

February 21, 2008
What was really interesting was the short amount of film each camera held, so on high jumps (12500) or on a jump like Cole's chuteless jump, he would wear two cameras, reaching up to turn on the second camera 20-30 seconds after exit, to make sure he had film of the whole jump.
If some old guy can do it then obviously it can't be very extreme. Otherwise he'd already be dead.
Bruce McConkey 'I thought we were gonna die, and I couldn't think of anyone

February 23, 2008
Thanks Howard. PM sent...
Green Light
"Harry, why did you land all the way out there? Nobody else landed out there."
"Your statement answered your question."