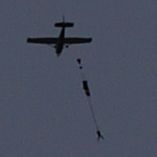 The pointy end of raindrops...