what was the worst canopy youve ever jumped?

March 10, 2009
my old heavy weight strato cloud. free packed with the lines figure 8ed into the bottom of the cont.and no d bag. was never fun and often painfull at terminal
i have on occasion been accused of pulling low . My response. Naw I wasn't low I'm just such a big guy I look closer than I really am .

my old heavy weight strato cloud. free packed with the lines figure 8ed into the bottom of the cont.and no d bag. was never fun and often painfull at terminal

At least mine had a frap-strap!

Other "dishonorable mentions" from years past were the Paradactyl and the Thunderbow...


OH come on... my TerrorDactyl was not all THAAAAAT bad.

After you get over that whole nose looking like it was going to fold under any second it flew and landed just fine.. Of course I weighed a tad less then too.

I think my Parafoil ( first brand new canopy I ever bought) that I got in 1976 was the most "interesting" canopy as it was prone to doing strange shit... like blowing off the steering lines every 10th jump or so and I got REALLLLLY good at doing riser flares and landing. Then there was streamering for 1800' on several occasions. I had to chop it twice when it was doing that.... I usually started getting skeered at about 1000'

March 10, 2009
Blue Skies L.O. miss your posts
If first you don't succeed then skydiving isn't for you!

March 10, 2009
Anything from Strong, specifically The Tandem canopies.

The thing has no flare. Even the manual admits that the flare really just slows down the forwards speed without doing much for the descent rate. Descent rate isn't horrible, but in light winds with no flare, that's not a big consolation.

But the worst thing is how sensitive it is to turbulence, how easily it stalls, and how badly it recovers. The manual advises not to fly behind any other canopy below 1500 ft. The canopy always felt like it was close to a stall.

The stall point on the toggles is somewhere around one's shoulders, which doesn't inspire confidence. (At least on the one I jumped, which seems to have the original dacron lines, so should be reasonably in trim.) Then the single surface canopy has no real pressurization to help it resist deformation and collapses either.

I've tried to do a mild stall twice, toggles down just enough to stall it, and then let it recover. Both times it took literally 10 seconds (on video) to get it to recover. It's not like I'm a wuss when it comes to stalls; I've stalled or trashed all sorts of canopies. But with the 'Dactyl I'm still not sure if I actually helped it recover, or if it just recovered when it felt like it.

In the stall the canopy would oscillate forward, backwards, and side to side, seemingly randomly, with the pilot chute and bridle appearing off in every direction, and the Dactyl just not wanting to dive forward and resume normal flight.

Definitely the scariest canopy that I planned to land!

(While it isn't as impressive on video as in person, the couple stalls are at: http://blip.tv/file/1193719?filename=Pcxstuff-ParadactylStalls377.flv)

- I used to reach for the ripcord very reluctantly on every jump, knowing what was about to happen........

Two jumps on a day was all I could take - then I needed a few days for the stiffness in my back to go away.... 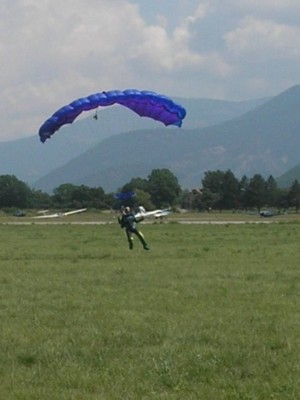 March 10, 2009
Worst Canopy- 7 cell cruiselight 220- dunno who even made it but it used to be one of our old demo canopies. shockingly hard openings. Now my electra 170 is just awesome

Dudeist Skydiver #170
You do not need a parachute to skydive, you only need one to skydive again

March 10, 2009
Master main 425 ... hard openings that rock all over the place ... the toggles are only used for steering your way to the point of impact ... plain and simple a totally shit canopy 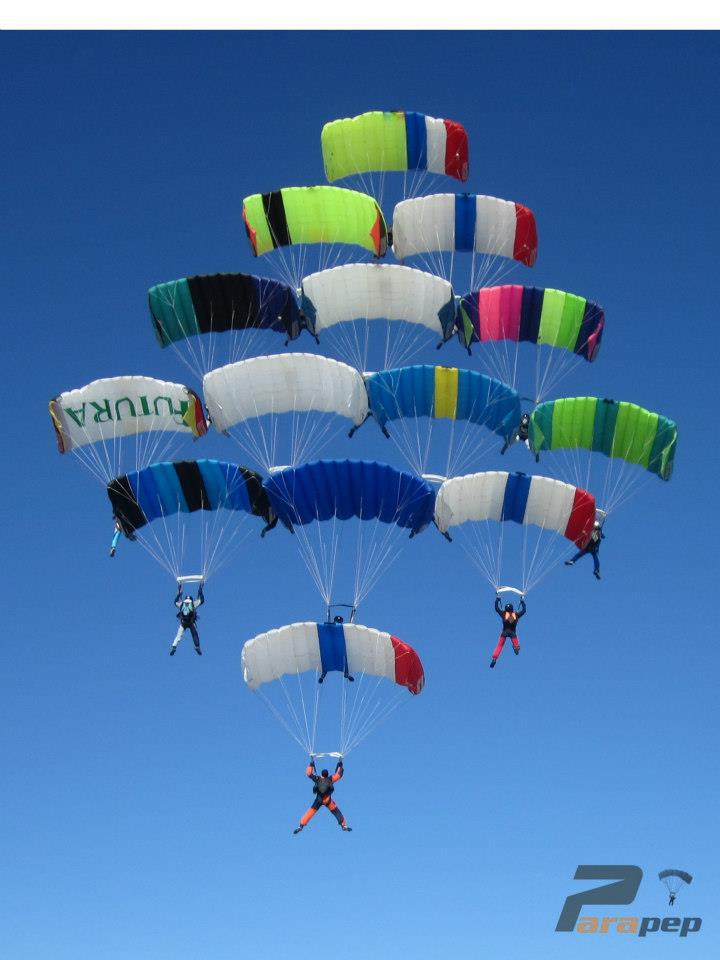 Sabre
The openings were occasionally so hard that they killed people.

Ditto for me. Granted I've been in the sport less than a year - but I jumped a Sabre 1 170 twice, and each time it just slammed the shit out of me. The second one felt like someone had nailed me in the back of the head - and I got the worst line twists of my life to top it (almost had to chop it).

This was after the best pack job of my life, to boot.

I noticed that too - I have quite a few jumps under a Sabre 190 and boy, did that b*tch like it rough...
The softest openings she gave me were those after a really crappy packjob. OTOH, if I treated her right, SHE would slam ME.
I knew what to do....
"That formation-stuff in freefall is just fun and games but with an open parachute it's starting to sound like, you know, an extreme sport."
~mom 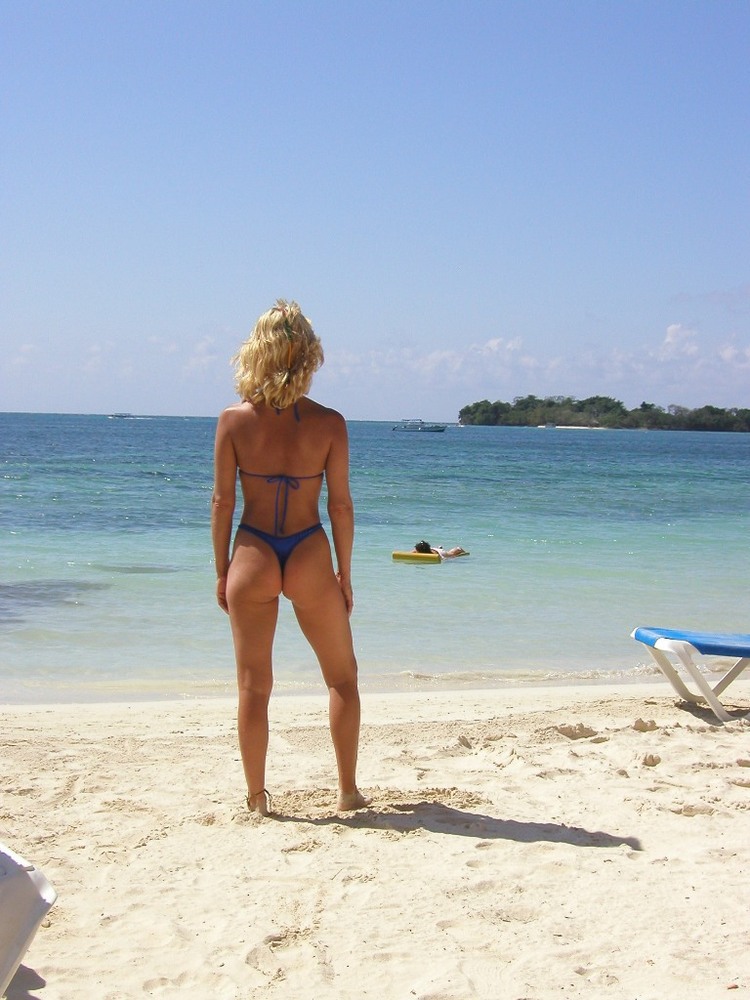 March 10, 2009
Speaking of great canopies and soft openings,,i used to jump a 9 cell Dragonfly,,never had a hard opening, man i loved that canopy. First new canopy i bought. Got stolen at the 86' Freak Brothers Convention. I still miss it....

It stayed stable, just took some getting used to. 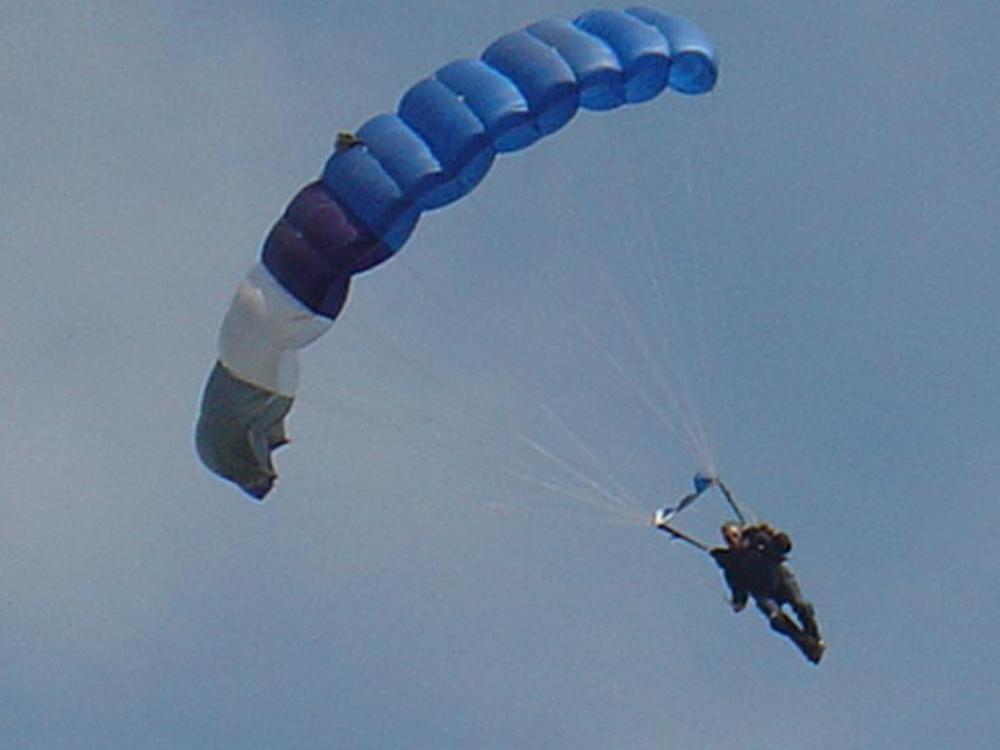 it was twitchy and small and i just didn't like it.

landed it hard. but IN the pea gravel...

when i had an RW Challenger 240 that gave me 11 or 12 hundred trouble free deployments... retired it with Zero mals....

first time i ever jumped a 5 cell
ram air, and it was the LAST time too..

Aww, that was my first square. Long line, modified with a slider, I bought it used. I had about 7-8 standups in a row, but I was young, skinny, and tough. F-er would probably hurt me now.

I agree with you judgment on size. I have a 200 square foot reserve, loading it 1 to1, and I'm not giving up a foot of it.

Worst Canopy- 7 cell cruiselight 220- dunno who even made it but it used to be one of our old demo canopies. shockingly hard openings. Now my electra 170 is just awesome

My worst canopy: CruiseAire by ParaFlight.

First 9 cell I ever jumped.

It stayed stable, just took some getting used to.

That brings back a scary memory;

Jumping the DZO's new Raven 4;
Down into pattern altitude, still playing with it to see how it does in deep brakes;
At about 600 feet I feel a strange movement out of it;
Look up; AAAGGHHH!!!!!!

The two rear corners are almost touching!!!
Frantically start nursing the toggles back up as fast as I can w/o diving or changing heading;
Finally have a square parachute overhead once again, and flare like hell;
Unfortunately, I'm heading downwind, and bounce across the ground like a sack of potatoes.

Needless to say, the DZ got a lot of entertainment out of that.
"There are only three things of value: younger women, faster airplanes, and bigger crocodiles" - Arthur Jones.

March 12, 2009
As far as opening, the Vengeance 150. One more rotation above DZ Empuriabrava, and I would have cut away. Same in Gap. Flying and landing it was nice though. His recovery arc was long enough in preparation for the next step i.e Katana.

OH come on... my TerrorDactyl was not all THAAAAAT bad.

I owned one, wish I still had it, but it got stolen by a fellow member of our club at Cherry Point. Oh well, live & learn.

But the real thing is that it always opened WEIRD. And HARD. Forget firm, this was a car wreck at 100 MPH!

For me, the Paradactyl wins hands down.

The thing has no flare. Even the manual admits that the flare really just slows down the forwards speed without doing much for the descent rate. Descent rate isn't horrible, but in light winds with no flare, that's not a big consolation.

My friends always described my landing under that one as "FEET-ASS". Nothing in-between. Of course, I weighed about 185 then, perhaps that canopy was just a tad overloaded.

The stall point on the toggles is somewhere around one's shoulders, which doesn't inspire confidence. (At least on the one I jumped, which seems to have the original dacron lines, so should be reasonably in trim.)

Hey, I got a quick question -- did it seem like those lines were STARCHED??? The lines on mine were extremely stiff -- starched is the only way to describe it.
I'm a jumper. Even though I don't always have money for jumps, and may not ever own a rig again, I'll always be a jumper. 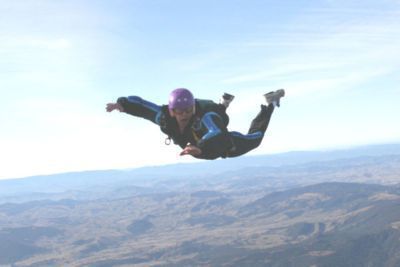 March 13, 2009
Brought a nice 215 monarch with 70 jumps on it not long after AFF. The openings nearly killed me. Put a 50% bigger slider on it and was a flamin beauty of a canopy. flew and landed great. opened great. its a shame to sell it cause i am downsizing. so i suspose its the worst and best canopy i have owned. 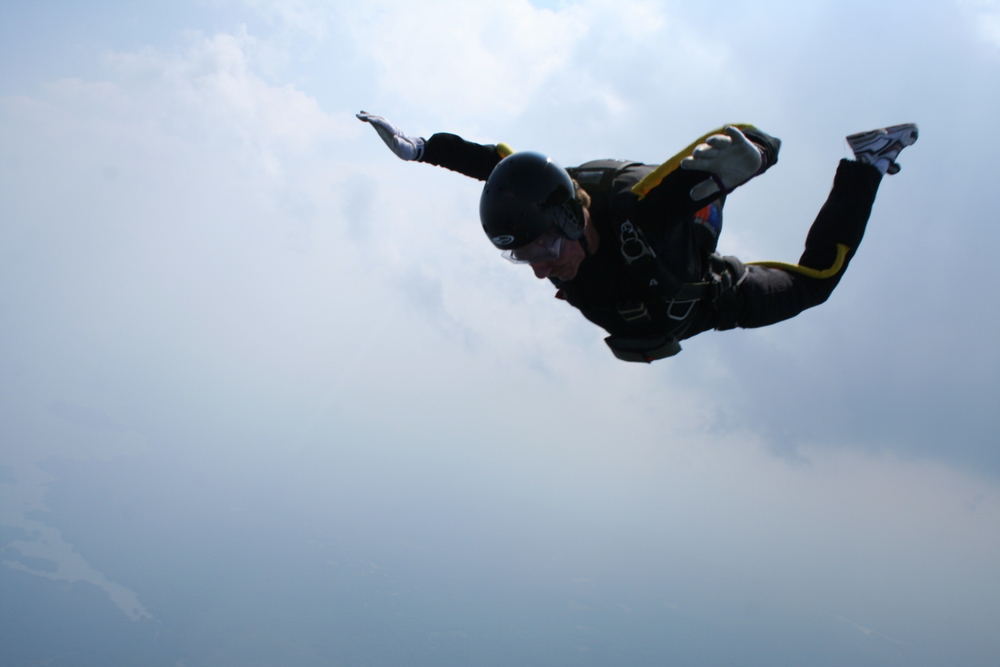 March 13, 2009
Well, just a newb student in AFF, but I have already noticed a HUGE difference between some gear, and have had two slamming openings so far - on a PD 260 student rig. One opening was not only jarring, but went into a turn (which I had a hard time controlling all the way down). It didn't flare for crap, and I basically planted myself with it. Changed DZs, and jumped newer gear, and things have been okay so far!

Below is a pic of me fighting the second hard opening and auto-turn, trying to get it straight and flare!

March 13, 2009
Worse ride/landing but happiest to see: Belly-mounted twill reserve without a PC or steering modifications of any kind.

Then again, I jumped a 5-cell custom Strato-Flyer about 200 times. That thing was built like a tank but would crash in if the winds were anything less than 10 MPH.