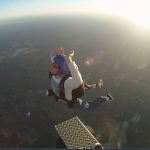 Laws about skydiving away from dropzones.

By jamester28, May 19, 2010 in General Skydiving Discussions