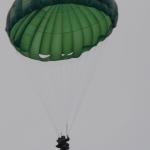 Round canopies and county specific rules and laws?