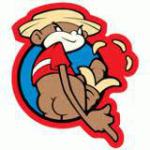 Landing out... A Farmer McUpset story

By BigMikeH77, May 28, 2013 in General Skydiving Discussions