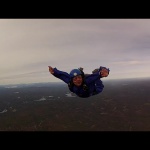 Noob Q of the day: Angle Dives vs Track Dive?