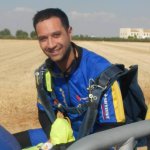 Which skydiving stunts do you consider to be more dangerous than playing Russian Roulette?