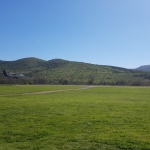 TI Yelling GO! from the back of the Otter