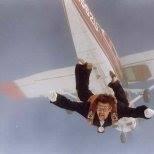 Not sure what this is,,,,but it looks interesting enough.