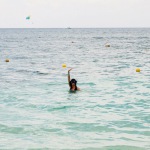 Getting over the fear?