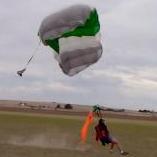 Why Cross-Braced only for high performance canopies?