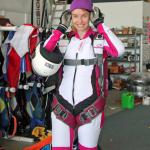 Lowest pack volume and lightest reserve for it's size