As a general comment: I remember saying that any component you add to a system adds complexity and therefore adds potential failure points. A few people commented that the Skyhook was so great because they couldn't see any downside.

I'm not saying Skyhooks are bad or dangerous, but people tend to minimize the added complexity and new types of malfunctions new systems bring to the table.

August 13, 2009
All his gear was so brand new and that did look like queenstow.

I thought it looked like he was protecting his camera gear so much that he forgot to protect his rig. If he is from NZ then he will be use to jumping out of cessnas.

I have to wonder how many jumps he had with all that gear matching 100% and looking so new. Should he have had camera gear on his head if he cant look after his gear that saves his life?


I am only asking.

I thought it looked like he was protecting his camera gear so much that he forgot to protect his rig.

If you watch the video carefully, you will see the door come down and hit his yolk. Then it looks like the front edge of the door catches on the back of his helmet. He raises his left arm to push the door up. Then the guy inside tries to push up the door.
During the shuffling is when the latch catches the reserve.

The mistakes were the protruding latch mechanism and the pilot not keeping the door up. The jumper did everything right.

> it is supposed to be able to let the reserve deploy without pulling the Collins Lanyard.

The RSL, the Skyhook connection, the reserve pin and the Collins lanyard are all one piece. If you take your RSL and pull it all the way out, as hard as you can, you will pull the pin on the reserve and cut away one side of the main canopy.

If, on the other hand, you pull the pin and then stop pulling, the pilot chute will (likely) disengage from the Skyhook device as it departs, leaving the main parachute attached.

In this case, the jumper is very fortunate that he did not pull the RSL out far enough to activate the Collins lanyard, and that his friend helped clear the entanglement before he got yanked off.

For a better view of what the RSL looks like on a Skyhook equipped rig check out the second page of this:

The document you linked to has pictures of the older style RSL lanyard.

I was thinking of the lanyard as it is now being produced.

The new lanyard has the Collins loop on a separate "leg" of the RSL.

At least one purpose of the change was to better isolate the Collins from the pin and the Skyhook attachment.

The new design makes it far less likely that the Collins will be activated unless you are actually pulling from the riser end of the RSL. 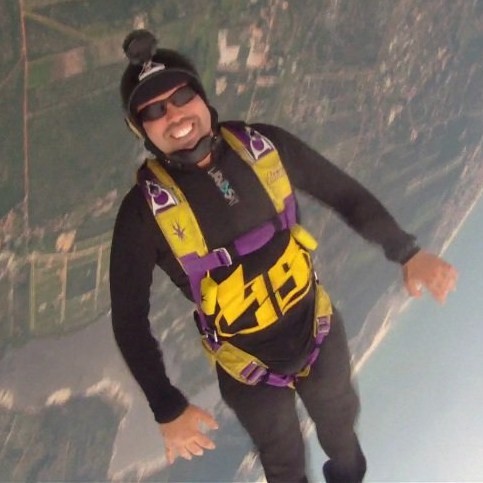 August 13, 2009
The skydiver on the video is a good friend of mine from Argentina, Diego.

I sent a email to him so he can give more data about the incident and post here if a get a response soon!

Scary s$#%, gets even scarier when you realize is a friend of yours in that scenario!

The jumper did everything right.

except jumping with RSL and Video, even if the video has nothing to do with the incident.
scissors beat paper, paper beat rock, rock beat wingsuit - KarlM