June 29, 2010
Yes, it is. I do it regularly, and did all through menopause. What do you think are appropriate occupations for menopausal women?

If they did it right, their kids are leaving the nest about then, and menopause kind of makes them ineligible to start again.

I guess that means lots of sex

There is nothing more dangerous than breaking a basic safety rule and getting away with it. It removes fear of the consequences and builds false confidence. (tbrown) 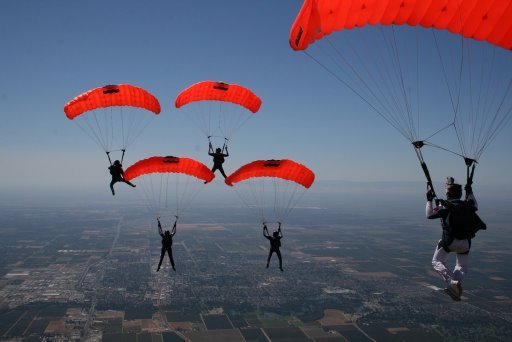 June 29, 2010
I was involved that day, and Barb's age had nothing to do with it. She was having her best day, beating the more experienced guys to the slot, getting the job done. She was locked in her slot, flying great, when the other side of the formation hit her. The reason she was involved in that accident is she was in the right place at the wrong time, purely a victim, and it could have been any one of us on the jump that day.

If you knew Barb, you would know you were way off base. She had summited Mount Whitney just three weeks prior. She had just been promoted at work as a correctional officer, a field dominated by young men. She could bike further, hike higher, and was jumping better than ever before.

Basing a medical opinion on only one factor (age) is very poor practice. Determining a specific person's mental faculties based on averages is poor practice.

It appears I was incorrect putting the two profiles together and assuming that one is an alias. While I always do the best I can to piece things together carefully, I was in a bit of a hurry this time in favor of keeping this lady's memory from being further dishonored through a rather off-the-wall discussion.

My apologies to Tom Hall and George Loudakis for the mistake.
Arrive Safely