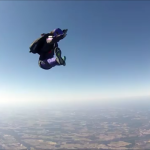 How did everyone get into skydiving?

By jnjusticar, April 20, 2016 in Introductions and Greets