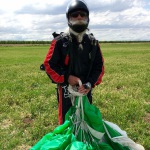 How to disarm the doomsayers?

By wstrnstar, October 16, 2013 in Introductions and Greets