April 25, 2007
I'm not sure if it's over but you could post your photo all over times square if you were wearing raybans - perhaps someone could send them one of a 'REAL' jump 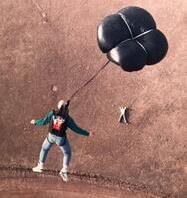 April 25, 2007
It's hard to fathom that "is it fake" is still being debated. It's as phony as the President's military service record. But that's a good thing. We can only hope they faked it because several BASE jumpers told Ray Ban to go "F" themselves when asked to participate.

When I see BASE jumping being used in this manner it reminds me of the first time I saw this happen. And I only recount it now for those too young to remember, and to point out the differences between then and now . . .

In the late 1980s we were still using skydiving canopies for BASE jumping as the first FOX and Mojo canopies were still some years in the future. At the time all jumpers, BASE & airplane, are wearing sneakers (running shoes) but it was painfully obvious we BASE jumpers needed something more because we were pounding in downtown with our too small skydiving canopies. The answer, of course, was boots, but (combat) boots were something your mother wore so we never even considered them.

Our answer was to get a better sneaker. And it was the right time for it as running or jogging was the latest craze in America and the shoe companies were trying to cash in. And besides, the term "sneaker" never seemed as apropos as that's exactly what we were doing in the middle of the night.

I'd read about a new shoe from a company called Airwalk. They had rubber balls of gelatin built into the soles and heels and promised to put a "spring in your step" and I thought perfect! Flubber for BASE jumpers. And they were good. So much so that I wrote about them in a BASE magazine and called them real "Ranger-Evaders."

There was actually an Airwalk store in Lake Elsinore so I went down to buy a pair. I went into the combination surf/skate/hang glide storefront and walked right into the shock of my life. There on the wall was a poster. It was huge and showed a BASE jumper from a low angle running off the edge of building wearing, of course, Airwalk shoes.

It needs understanding that in 1980-whatever, this just wasn't done. It was fine to be a hero inside the BASE community, but it was blaspheme to do this sort of thing out in public.

Since the very first version of "Photoshop" wasn't available until 1990 it never crossed my mind to think "fake" like people always do today. And it wasn't fake, it was real, and it was John Vincent. The guy who would soon become the patron saint of glory hounds and site burners worldwide. But this was before those terms were in general use.

Worse, they weren't for sale. They were free for the asking. I grabbed two of them and drove straight to Moreno Valley where Moe Viletto lived and I said, "Sit down, Moe; I want to show you something."

He died. We both did a little. Right there and then in Moe's living room we were hit by the sledge hammer of change and we hated it. "So what do we do?" I asked, "I mean how do we handle this?"

I'll never forget Moe looking up at me and saying, "We aren’t going to handle it at all. This is just going to happen and nothing we do will make any difference."

I couldn’t believe it, or at least I didn’t want to, but he was right of course. What was once the secret of the night was now the stuff of Madison Avenue and we all, for the first time, faced walking a fine line. I know Todd thought about it when he started Basic Research. I know I thought about it when I started the Fixed Object Journal. We suddenly went from being underground because we thought we were good at keeping it quiet. But the real reason we got away with it for so long was nobody was paying any attention to us.

The final straw was at Bridge Day that year. The BD trade show had, so far, been un-corporate to the hilt, but there they were. "No-Fear" and their line of tee-shirts. Andy Calistrate, who was organizing that year, got an earful from most of us, but he was riding the wave and (we felt) cashing in but it was all just so "un-BASE."

But, un-BASE was something we'd have to get used to, and mainly because no one knew the difference anymore, and if you didn't go along with it you were left in the dust.

But sometimes being in the dust isn’t so bad. History will clarify things as it often does once the dust settles. I know, the Agnos', the Baumgartners', and the Coreless' are jumping. But each jump they make, and publicize, for sure, is done with a Saint John Vincent medal around their necks . . .

If you keep telling these stories I (or someone) could write your book for you.

I am Joking of course.

But seriously, we all appreciate your stories of the past and present, and fear your predictions of the future.
Thanks Nick!
Leroy


..I knew I was an unwanted baby when I saw my bath toys were a toaster and a radio...

April 26, 2007
Okay, i'm a low jump skydiver and even i can tell this photo is bullshit. Nice stable exit... Pity BASE is still portrayed in this way too, hopefully it will change someday.

I took the photo and put in into PSP(not a Photoshop person) enlarged it 420%. Look at the right elbow, just up from the pad. there is some of the background left on the persons picture. It overlaps the background of the buildings with a lighter color.

-A
"Don't keep your pilot chute a secret"

-A
"Don't keep your pilot chute a secret"

Is there a technical advantage to the number 420, or is that just a personal preference of yours?


But sometimes being in the dust isn’t so bad. History will clarify things as it often does once the dust settles. I know, the Agnos', the Baumgartners', and the Coreless' are jumping. But each jump they make, and publicize, for sure, is done with a Saint John Vincent medal around their necks . . .

You do your thing and I do mine, but it seems like we've reached the same conclusion.


It just made more sense!