I think its mostly the same story and the same picture, but I liked the last line:

"It was not clear what the purpose of Monday's jump was."

Fill in your own answer...

January 31, 2006
Could someone explain to me why what Felix did is worse than what, say, Jeb did when he got busted on the Eiffel tower jump?

Or why, Jeb & Iiro garnering media recognition in that new TV show is laudable, whereas Miles or Shane’s media attention is, in general, not? 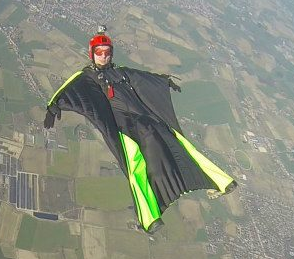 January 31, 2006
Jeb got busted, but didn't call every press agency in the world to let them tell that he had done the jump or was going to do the jump.
He did it more for the jump itself, to fullfill his dream (watch ground is the limit, he tells all about that jump in there) and not to gain media-attention, I think

Also, I think that the jumps done in 'The Courier' were all done with permission. I don't think security would be able to laugh if you would come up with a couple of armed men to film and fly a heli around the building...

I am a local here at México city , personally I was busted trying to jump this B , I was already on the Helipad when they got me (Bastardos) anyway the security was very tight so getting inside was impossible except with a permit which they got probably because of his sponsor.
Anyway I watched the jump from below( a little sad for not being a part of it) but at least I saw it, he landed right on the spot. And let me tell you this was a technical landing with only a small area to land.

The jump didn't go so well for Felix , the free fall and opening part, I think he overrotated his gainer and had to open in an unstable position, but you can see the pictures as they speak for themselves.

In general I was not happy that he burned it but on the other hand I am glad he landed OK and that his jump was a success maybe it will help us open new sites with permits. We have to make the best of it.

One last thing , we should not believe what we hear from newspapers , I was right there on the landing area and this was not a bandit jump he had all the permits even from the police , they were even helping with the traffic. They just made that to make it cooler, I even saw Felix in a picture next to an officer who was keeping the people from getting inside of the landing perimeter.

PS I have nothing against Felix the description of the jump is just what I saw, and here are the pics

January 31, 2006
yeah... i thought that ethics were involved in Base.. from what i have read it seems that way.. contact the locals... and dont burn a spot otherwise you get tarred and feathered.... anybody going to tar this guy?
He seems to have done some cool jumps but from my very limited knowledge this last one was fucked cause the Mexican jumpers had one of their best objects burned...
just my $.02
HISPA 72 ----- "Muff Brother" 3733

January 31, 2006
So if he did get all the necessary paperwork for the jump, what did he do differently (wrongly) from another jumper who may have contacted the locals and been caught? If people have been caught there before then why was it not burned until this jump?
"The evil of the world is made possible by nothing but the sanction you give it. " -John Galt from Atlas Shrugged, 1957

January 31, 2006
If nothing else, Felix has shown that despite hudreds of jumps and full sponsorhip, he still can't throw a simple flip and pull stable. I think it must be harder for tiny elfs to remain stable in freefall.

Thats pretty funny though, getting permits and then acting as if it were a bandit jump. I think that stopping to talk to the media took away from the authenticity of the "bandit" nature of jumping. I'll give this jump a 7 on the Felix scale, since he didn't actually burn anything.

It's all the way at the end, you'll have to watch it for about 15 minutes

Tristan
Will you answer "NO" to my next question?

It's all the way at the end, you'll have to watch it for about 15 minutes

Click right on the videofile. You can find it's source there and look at the file in windows media player. There you can go forward.

I live in the UK, a considerable distance from Mexico City. Today I received a text from a non jumper friend saying he just saw this jump by an austrian on TV.

Yeah, on TV in the UK. That's news. Worldwide news.

It's news because Felix in his wisdom has decided that what he does has to be told to the masses, so he and his sponsors call all the news agencies and invite them along to watch and report and film.

Why does that bug me personally?

Because what he seems to not realise, is that hundreds of BASE jumpers the world over, hidden from the public glare are secretly planning their own building jumps. Jumps which they have had to put a lot of effort into to get to the exit point. These jumpers, haven't the luxury of a coporate sponsor who can organise their jumps, and pull strings to get access. They have got there through sheer determination, sheer luck and in the majority of cases, sheer oversight on the part of building security.

Now however, in every hotel lobby in the world, in every apartment block, in every office building, security personel are watching felix's 'bandit' jump on the national news and are thinking 'man, i bet someone get's their arse kicked for letting that happen.....oh wait a minute, could that happen here.'

Now the majority of security personel won't actually get off their fat behinds and go check the door to the roof, or the stairwell access, so no harm done there. But I will bet you that worldwide some will. And somewhere a jumper might have lost their access and they don't even know it yet.

At the very least, basejumpers are now at the forefront of the minds of most news watching security personel the world over, which means we all have a higher chance of both getting busted or losing our access.

In a nutshell, building jumps (especially occupied buildings) are hard enough to bag as it is, without felix broadcasting to the world that we're out there and doing our thing.

It wouldn't even have been so bad if it was a legal jump and reported as such. That way everyone in a position of security would be happy that the status quo has been maintained.

I really feel for the local jumpers in Mexico City at the moment. Their Buildings will be under a lot of scrutiny, but because of the global news networks, felix's antics create ripples way beyond the 'local' level that usually gets created when a jumper is spotted or busted. That's what bugs me.

I recently jumped a TV tower in the middle of nowhere and the tower technician/engineer showed up mid-day on a Sunday and busted us inside the perimeter. He called the police and left (the cops probably told him to leave and let them handle it). Well we decided to get down and out.

This guy was blocking the road with his truck and said he knew we were BASE jumpers and started going into a rant about how dangerous it was, and how people get hung up on the guy wires, and he knows we've been jumping it, blah, blah, blah... When he asked for our info (so he could charge us) I drove around his truck and left. Somehow we missed the police and got away unscathed.

This was shortly after the Agnos mishap and I can't help but wonder if the media coverage of that incident had this guy checking the A at different times as a heightened security measure.

January 31, 2006
he has been here and done his thing from the big scottish road bridge and not long after cameras were fitted and laws passed to enable arrest for jumping from ANY of the big bridges here...he does well for his sponsors but does the sport no favours with the whole bandit style of his broadcasts he makes every man jack look like we areout to bust the rules and give the man a poke in the eye ...the trouble is that's how Red Bull want to be seen and legal permitted jumps wouldnt be good brand positioning...they are an extreme sports company so they want and get extreme.

he is ostracised by his fellow countrymen for being an arse...i know ive spoken to former team mates of his...even fellow red bull sponsored athletes of his think he is a prick...i for one have never met him so as a person i cant judge him but as a BASE jumper i think the guy needs to read sabre 210s post and try and sort his act out...

1. I don't really care about the whole Red Bull sponsorship thing etc.....good luck to the guy and live and let live. It would just be nice for him to realise that his publicity isn't always useful to other jumpers.

3. (covering his back) Some urban jumps you run a high risk of getting busted. It could happen to anyone (really covering his back), I just think on those jumps, inviting the world media along is necessarily the best idea.

As I said before , he stopped to chat with the press, the whole time the police was helping with the traffic and from keeping people out of the perimeter where he landed.

I also have a picture of him (attached) where on the right side of the picture behind the camera guys there is a policeman watching the whole thing, andd from the look on Felix face he doesn't look like he is fleeing the police , does he?

Anyway I am not attacking him I am just saying that the news here say it was a bandit jump and me and my friends were feet away from the police which were trying to help make the jump safe for Felix and from all the spectators.

January 31, 2006
They really should put Felix on a box or something for his phot shoots. Its looks pretty funny with all the camera guys bending down and leaning over to get a shot of him. I can can't help but wonder if Felix had ever hit his growth spurt, would he be so ego driven and need so much attention. If anyone knows Felix, tell him to try http://www.parmalab.com

With a little Rx help he could jump stable and not have to do fake bandit jumps to get people to notice him. Lets take up a collection. Spend some dough so Felix can grow. Your local jumpers and objects will thank you.