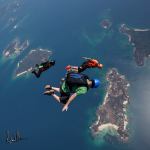 Pitching on your back.