Out of the East (Yin Yu's Story)

Yin Yu Is In Your Sky, And She’s Bringing China With Her

If you don’t know about Yin Yu yet, take note: You will. (You’ll probably meet her as “Daniela,” the name she goes by in the States.) Yin’s rarefied position as one of the only Chinese athletes teaching skydiving to a Chinese student base has put her at the forefront of a growing wave that’s getting ready to engulf the world in new licensees. Her business--AUV Skydiving--has already graduated more than 50 Chinese skydivers, and the waiting list is growing at an exponential rate.

“They know the US gives the best skydiving education,” she says, simply, “so they want to come over to the US to learn how to skydive.”

In a lot of ways, this story starts when Yin moved to the U.S., 10 years ago. For the first couple of those years, Yin lived in Atlanta. She did her first tandem skydive at The Farm (now Skydive Spaceland Georgia) and started her AFF there. Distracted by a heavy academic schedule, she didn’t finish. When Yin moved to Chicago to earn her Master’s degree (quickly followed by a high-powered internship and job), she found what she still refers to as her home dropzone at Skydive Midwest.

“The major reason I wanted to learn to skydive,” Yin explains, “was that I felt under too much pressure from balancing hard work and cultural differences. Being a Chinese person in America is challenging. The conflict of the culture is the hardest part. There is the overall feeling, all the time, on the inside: No one really gets me. I’m just sitting in the corner, wishing someone could talk to me and understand me.”

With jumps tucked here and there within a packed schedule, it took Yin three seasons to earn her solo skydiving license. 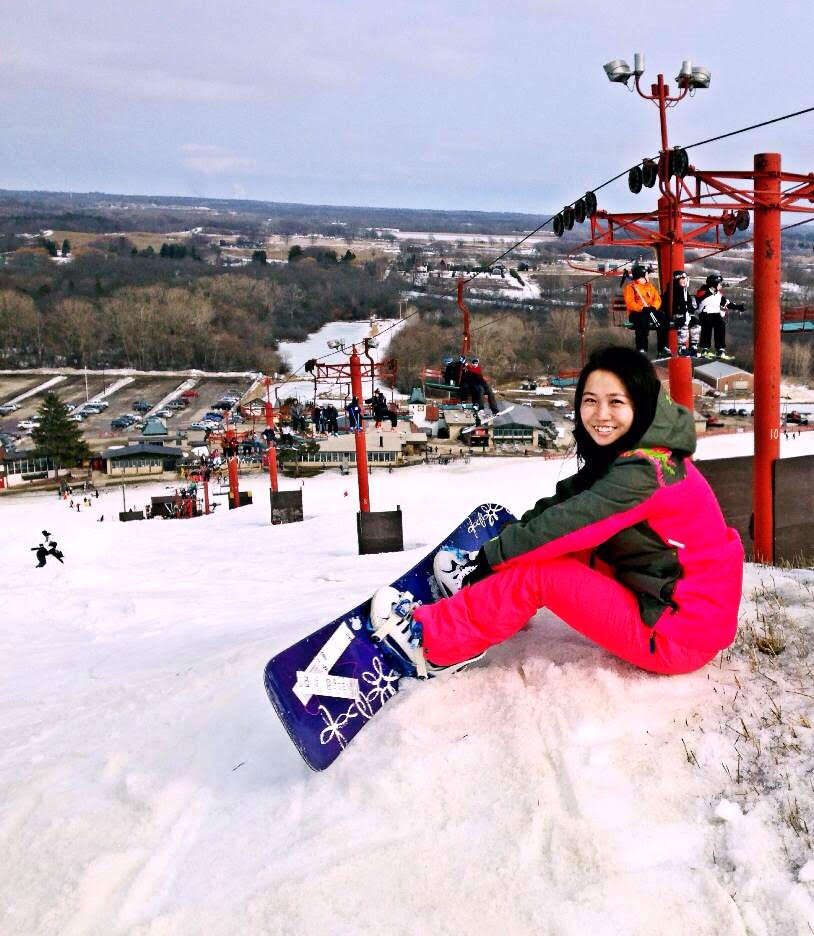 “When I first finished my 25 jumps,” she explains, “I wasn’t able to find someone to teach me how to pack, because everyone was in the sky and I could only come on the weekends. So it took me forever. I had 60 jumps by the time I completed the packing course, so I just applied for a B license. I never had an A license.”

“I teach almost ½ of Chinese skydivers to get their A license,” she laughs, “but I never even had an A license.”

Yin’s whopping market share is motivated by a whole range of factors. The first of these, of course, is that the cultural differences between east and west loom large for skydiving students even more than most. Learning to skydive is a highly stressful proposition, and navigating its exacting, immediate requirements at the same time as navigating the subtleties of a new culture has proved preventively overwhelming for many would-be students. Yin seeks to change all that.

“The US is very straight-talking,” she says. “You just tell people what you want. In China, people always talk in a circle to get to the point. And that’s just one of the differences. Chinese students can only really learn from a Chinese person. So I bring them in and teach them in the way they need--a way they can understand--because it is so stressful to do learn how to skydive. You can’t go over the barrier of the fear and stress and the barrier of the culture. Once Chinese students have a teacher who speaks to them in a language they can understand, both literally and culturally, they get confident and then the connections can happen naturally.”

“In China, education is also very different,” she continues. “I went to university here, so I understand very well that the American teaching style is really open. When you bring questions to school, the answers might vary. In China, you sit in the classroom simply learn what the teacher tells you. I try to combine the two methods so my Chinese students are comfortable, but they are better prepared to deal with the differences when they set out on their own.”

Yin brings the hard-earned lessons of her own student days to bear in her instruction. It was way back in those days that she initially decided on this path, in fact: When she saw the occasional Chinese skydiving student struggling in a system that wasn’t built to facilitate them. 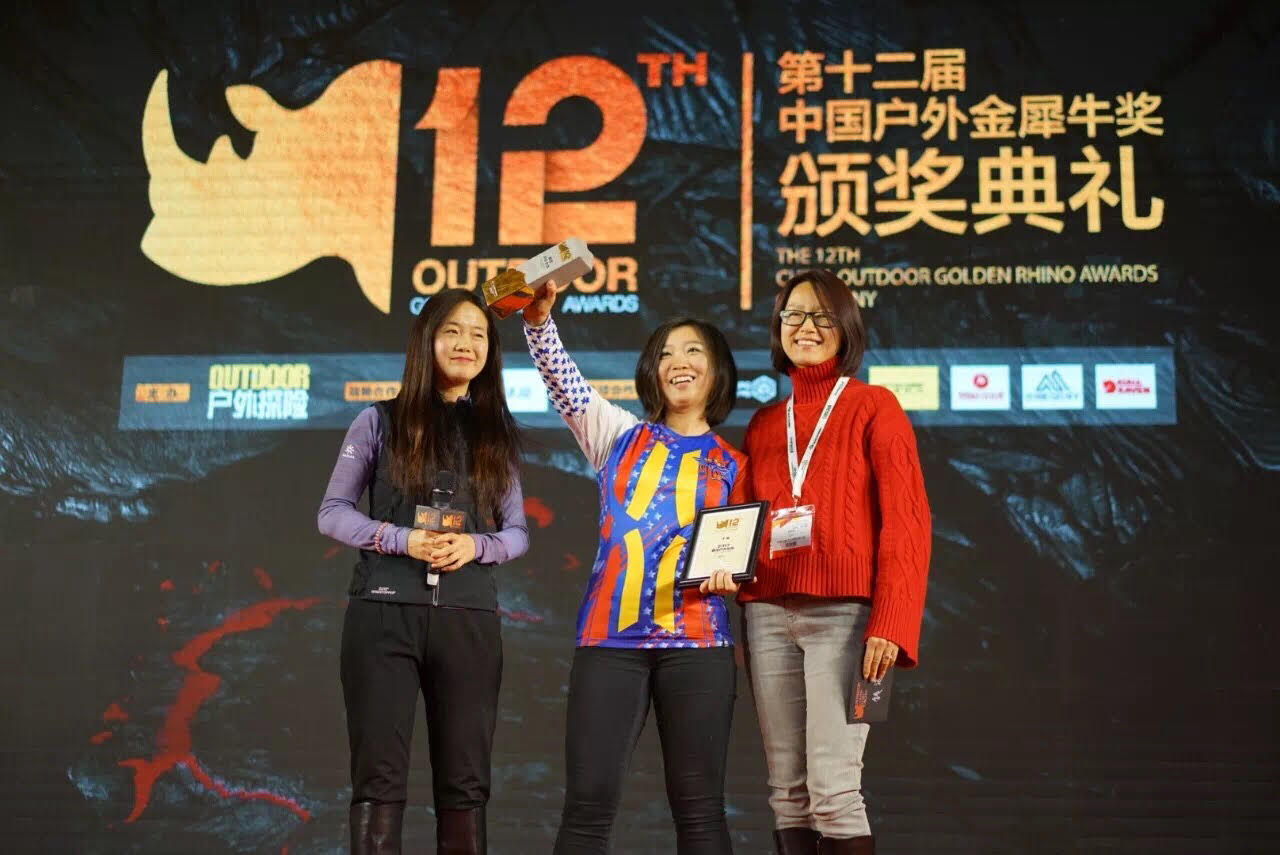 “For example: when you see a student flare too high, you tell students ‘Hold it!’ But if you say that another way--like ‘Don’t let go!’--they might be confused and freeze. Even though it means the same thing, switching words forces the student to process because they have to translate between English and Chinese.”

“Before I was an instructor, I saw many things like this happen,” she continues. “I tried to help interpret but, at the end of the day, I decided I should probably be an instructor and stop that from happening in the first place.”

She couldn’t help but notice some sticky equipment issues, too.

“I am small,” she grins. “I was even smaller when I started 10 years ago. I was 100 pounds with a 260-square-foot canopy. I constantly had bruises all over me.”

“I also had an experience with a cutaway that was very informative,” she adds. “I learned that the equipment was not designed with Asian people’s bodies in mine. Asian people are much smaller; their arms are shorter than what we think. We have to cut away a little more forward and harder.”

They also have to communicate a little differently, which gets in the way--especially in the vulnerable beginning. Yin notes that Chinese students are really nervous about responding in English. They do speak English, but they are reliably shy. If you’ve ever learned another language, you can empathize: It’s not necessarily that you don’t understand; you get nervous for freeze up.

“At a drop zone, a lot of the instructors will question a Chinese student to find out if they can do an action and think that the answer they receive means ‘no,’” she says. “When that student talks with me, It’s clear that they understand exactly how to do the action, but with English instructors--even if the student does speak English--there is this disconnect. American students will pretend to understand. Chinese students simply don’t fake understanding as well.”

When she decided to create AUV Skydiving, Yin was no stranger to business ownership. She’s been in business before: a smoothie shop; a magazine; a stage design business. She was raking in a six-digit, salary, but she wasn’t finding joy. She was never able to see her parents in China.

Interestingly enough, she already had a solid audience for her marketing when she launched the endeavor. As it turns out, Yin is something of a celebrity. In addition to several other entrepreneurial ventures, she was a songwriter. One of the songs she wrote “got her name out there,” as she wryly notes. Chinese students recognize her as the song’s writer--and, more recently, as the Chinese girl who wingsuited over Everest--so when she opened her doors, there were already faces pressed to the glass. She left her other work a year and a half ago to go full-time with AUV. It’s not just the AFF students, either: In 2013 and 2014 alone, Yin brought over 1,000 Chinese people to the States simply to experience tandem skydiving and the iFly wind tunnel. (She’s also the first Chinese AFFI certified by both China Aero Sports and the USPA, the first Chinese examiner candidate.)

Yin’s next project is to solve the problem of where those students can go when her two-week AFF camp complete. In China, as you may or may not know, there’s almost nowhere to jump. There are no commercial dropzones. For now, Yin’s students usually come back to the States to jump; this year, she’s organizing a group skydiving mission all over the U.S.

In the meanwhile, she’s starting to lay the groundwork In China for commercial dropzones to operate. In this author’s opinion, this is where it gets really interesting. Slowly by surely, Yin is making inroads, consulting with other Chinese entrepreneurs who are interested in opening dropzones. She’s also working on a education program for US instructors who want to go to China and teach skydiving skills and operating.

“There are a bunch of [Chinese aviation owners] coming to talk to me, saying they want to start a dropzone and asking me how,” she says. “I’ve been working for dropzones for 7 years, so I can help them. I am building a team as well, to teach people how to start a dropzone. I’m getting my examiner rating, too.”

“In China, everything is possible,” she adds. “It just comes down to the way you present things, and what kind of connections you have.”