Put simply, skydiving is the act of jumping out of a perfectly good airplane and performing aerial maneuvers in free fall before landing by parachute. However in the eyes of Canopies for Kids founders Matt Kuikman and Taryn McKay it was so much more than that. It was an opportunity to combine the sport they love with a cause that they were both passionate about. All they had to do was incorporate a few teddy bears.

Matt and Taryn launched Canopies for Kids in the Spring of 2012 with the mission of providing skydivers with the opportunity to take stuffed teddy bears along for their skydive. Their organization uses this experience to position those bears as "The Bravest Stuffed Teddy Bears in the World" which are then given to sick children in hospitals. Their hope is that these special bears will help provide kids with the hope, support, and courage they need in their fight ahead and in their journey towards living a happy and healthy life. 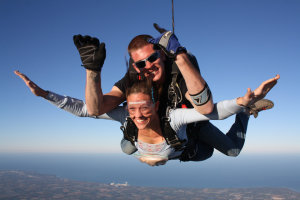 Participating in a Canopies for Kids jump is rather easy. You simply show up to one of their partnered drop zones and purchase a Canopies for Kids kit on top of your jump fee. Their kits are just $20 and include a Canopies for Kids teddy bear in a plastic bag flight suit and an envelope containing a card with a heartfelt message to the child in the hospital which each skydiver can sign and personalize. The costs of shipping and handling are also included, as well as a built in $5 donation to the Children’s Hospital. Recently they also added a Sponsor a Bear program in which individuals who don’t want to jump themselves can purchase a kit and donate the bear to go skydiving with another skydiver who is selected by the drop zone.

After the bears have jumped they then make their journey to the local Children’s Hospital that the DZ is partnered with. Throughout the entire process the bears need to remain in their plastic bag flight suits. The reason for this is because some of the children these bears are intended for may have compromised immune systems; therefore it’s important that they remain as sanitary as possible. The hospital will then deliver the bears and their cards to the kids in a manner that they see fit.

Canopies for Kids is presently located in Chicago, Illinois. In their first year of operation they partnered up with Skydive Midwest and the Ann & Robert H. Lurie Children’s Hospital. They had over 70 bears jump with minimal marketing and exposure. As the 2012 season rounded out, Canopies for Kids began to gain increased publicity thanks to a documentary being done about them by an organization called Bus 52. That documentary can be found below on Youtube.

Since the release of the documentary, the Canopies for Kids story has started to spread even further. Their founder Matt was recently interviewed on Skydive Radio and they are presently hoping to expand their operation to drop zones all over the United States. The organization is in the process of finalizing a partnership with a drop zone on the East Coast and will also have a presence at the upcoming 10th Annual St. Patrick’s Day Boogie in Fitzgerald, GA. They are even working with a few individuals to build affiliate operations in other countries. 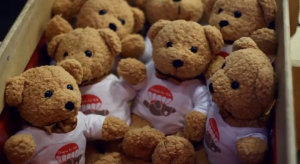