Australia is getting a Wind Tunnel

Australia is getting a Wind Tunnel!
Finally! With almost 40 Indoor Skydiving facilities around the world, for some reason it has taken several attempts over the last 10 years to build a state of the art tunnel in Australia. It came down to a group of courageous guys to spend the last 3 years finding a site, finding the right equipment, getting the best team together, and figuring out an innovative way of raising the funds (listing on the ASX) to make it all happen.

Danny Hogan and Wayne Jones, both ex SASR servicemen, have done what many people thought was impossible. Indoor Skydive Australia Group (ISAG) successfully listed on the Australian Stock Exchange (IDZ) in January and started construction of a 16.4ft SkyVenture tunnel in February. One of the world’s largest and most technically advanced, the location is part of the Penrith Panthers facility, Western Sydney. It will operate under the global franchise brand of iFLY as iFly DownUnder, which brings unrivalled experience and technology from manufacturing 24 tunnels around the world.

Launch is scheduled for first quarter 2014, You can keep track of the progress on Facebook/iflydownunder or by registering at iflyDownunder.com.au.

What does this mean for Australian Skydiving?

Australia – you go there to see kangaroos, koalas, crocodiles, pristine beaches or that big red rock in the middle of the dessert! It’s known for great walking, diving, surfing and now we can add flying to the list of tick boxes.

The tunnel will revolutionize skydiving in Australia and turn novice skydivers into awesome skydivers. It will slow down the ‘attrition’ rate of skydivers leaving and introduce new people to the sport. It will become the catalyst for a sporting Evolution in Australia that has never been seen before. It will create an entirely new sport of BodyFlight in its own right and introduce skydiving to those who can’t yet fly - from 3 and up. In summary – it’s a good thing for skydivers, skydive operators and every Australian who has always wanted to fly. 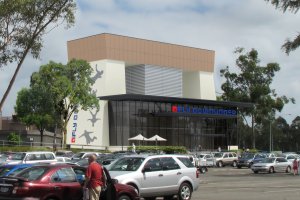 There are already some amazing Australian skydiving boogies on the map; The Equinox Boogie in Queensland attracts flyers from all over the world, some who come back year after year. Funny Farm is an invitational boogie in the outback which sees international coaches load organising some of Australia’s hottest flyers and the Full Moon Boogie in Victoria is now making a name for itself with Mike Carpenter (Volare) and Mike ‘Friday’ Friedman (Arizona Drive) organising at the event in recent years.

In addition to the big name coaches, Australia truly does have some of the best scenery around. From unspoilt coastlines with clear blue oceans to forests, gorges and red earth. Combine these with the welcoming Aussie spirit and a wind tunnel and Australia is shaping up to be a great all round skydiving destination. So next time you plan a trip down under, make sure you bring your jumpsuit as well as your thongs!

Many of the iFLY Downunder team are active skydivers and the centre will be built with skydivers in mind. There will be a skydiver’s lounge if you need to take a break and relax between sessions as well as the usual debriefing video stations and team rooms. Located in Penrith, a suburb in Western Sydney there’s plenty to do around the tunnel, whether you enjoy wakeboarding or white water rafting, need a hotel for the night, a good feed or a day relaxing in the nearby Blue Mountains national park. The team are striving to create a positive learning environment, where all abilities are welcome and where flyers come to meet like-minded skydivers.
We also need to mention the level playing field that will be created when Australian teams can finally train in an Australian tunnel. The Australian VFS team ‘The Addicted’ completed 11 hours of intensive training with Steve and Sara Curtis (Arizonal Arsenal) and Mike ‘Friday’ Friedman (Arizona Drive) in order to learn the new open VFS dive pool. Team member Lucas Georgiou stated that “a tunnel camp was really the only way we could get up to date with the recent changes”. 8-way team ‘Velocita’ also trained in a 16ft tunnel before the Dubai Mondial, that’s 8 people who now won’t have to pay for expensive airfares abroad to team train. You can expect to see Australia raising its standard in prestigious skydiving competitions around the globe from 2014.

It’s not just for the top teams that will raise their game using the tunnel. You only need to look at the numbers of new rookie teams taking part to see what influence the tunnel has. In the UK, which currently supports 3 wind tunnels and a fourth one on the way, the numbers of teams competing in the British Nationals has increased each year. 2012 saw a record 54 teams competing in the 4-way alone, bear in mind most of the skydiving season is spent waiting for the clouds to clear!

iFLY Downunder will hold regular skydiver events, competitions and tunnel camps for everyone from new tunnel flyers to those wanting to work on VFS, 8-way or the new ‘Dynamic’ discipline emerging from Europe. Prices, operating hours and additional information will be released later this year. Anyone wishing to host a tunnel camp should contact holly@indoorskydiveaustralia.com.au for more information and if you hold a current IBA tunnel instructors rating and are interested in moving to Australia please email your CV to admin@indoorskydiveaustralia.com.au.
www.iFlyDownunder.com.au