Todd Shoebotham, Owner and President of Apex BASE, Helps Jumpers Get the Details Right

Note: This article discusses pilot chutes in a BASE environment and should not be used in relation to skydiving.

Our beloved little workhorse, it’s the first thing we take out and the last thing we put in. It gets dragged around. It gets abused. For all the obsessive fawning we do over our canopies, our pilot chutes get surprisingly little love.

If you’re looking to change that--and learn a little more about the sizes and styles of pilot chutes that you should invite on your BASE jumping adventures--then you’ve come to the right place. We pinned down the inimitable Todd Shoebotham and picked his brain about it in order to share his infinite wisdom with our beloved public. We’re pretty sure you’re going to learn a few things, so lean in and listen!

1. Keep your fingers out of harm’s way.

Does your pilot chute have a tube handle? According to Todd, the data suggests that fingers have an uncanny tendency to make their way into that little tunnel at pull time, which can make for some seriously awkward Chinese-finger-trap deployments. “A few people have reported reaching back and going up to the knuckle into the PVC,” Todd says. “Or getting their fingers underneath the handle. When you’re reaching back, that’s certainly not what you want.”

This problem can be solved in multiple ways. If you do have a PVC-style handle with a potential finger trap, Todd recommends taping over the ends in order to eliminate this possibility. Apex pilot chutes forego the tube for handles that wrap rubberized, textured fabric around a solid foam cylinder.

“Compared to the old-style PVC handle, this is much lighter, too,” Todd explains, “And that lightness helps the pilot chute get orientated properly.”

2. Travel with a well-curated collection.

Since pilot chutes are available in everything from little 32-inch versions to behemoth 52-inchers, it can be challenging to determine what you really need to carry in your gear bag as a traveling jumper. Todd suggests that carrying a quiver of three to four will reliably cover your bases.

“On the smaller end, we typically set people up with 36-inch pilot chutes,” he explains, “But we still stock the 32s. The 32-inch PC is probably the least-popular one in our range, because we believe they only belong on the lightest parachutes.”

“We used to see 36s on wingsuit-specific rigs,” Todd adds, “But we’ve been seeing a lot of people with wingsuits favor bigger PCs because of their lower airspeed at deployment.”

From there, Todd suggests having a 42--”the workhorse in the middle”--which covers your standard Potato Bridge jumping, and a 46- or 48-incher, depending on the size of your canopy, for objects more along the lines of a low cliff or structure.

If you have a little more room in your luggage and you’re looking to jump a lot of subterminal objects, Todd suggests a 38-inch pilot chute. “Most people aren’t going to be using a 36 or a 38 handheld,” he says. “If you’re in that 5-to-6 second range, it’s a nice pilot chute to have, the 38. It is a slightly different pilot chute. It is not as strong of a pull, but you still have plenty of room there. I might not use it on all 400-foot objects, but definitely on some of them, and it is a little nicer flying with a slightly smaller pilot chute.”

3. Make adjustments to compensate for your choices.

According to Todd, there are mistakes to be made here in both directions. On one hand, unnecessarily oversizing is an easy mistake to make. While it’s not necessarily dangerous, it can negatively affect your jump if you don’t keep your delay relative to your PC choice (and create unnecessary distortion to the canopy during extraction, to boot). 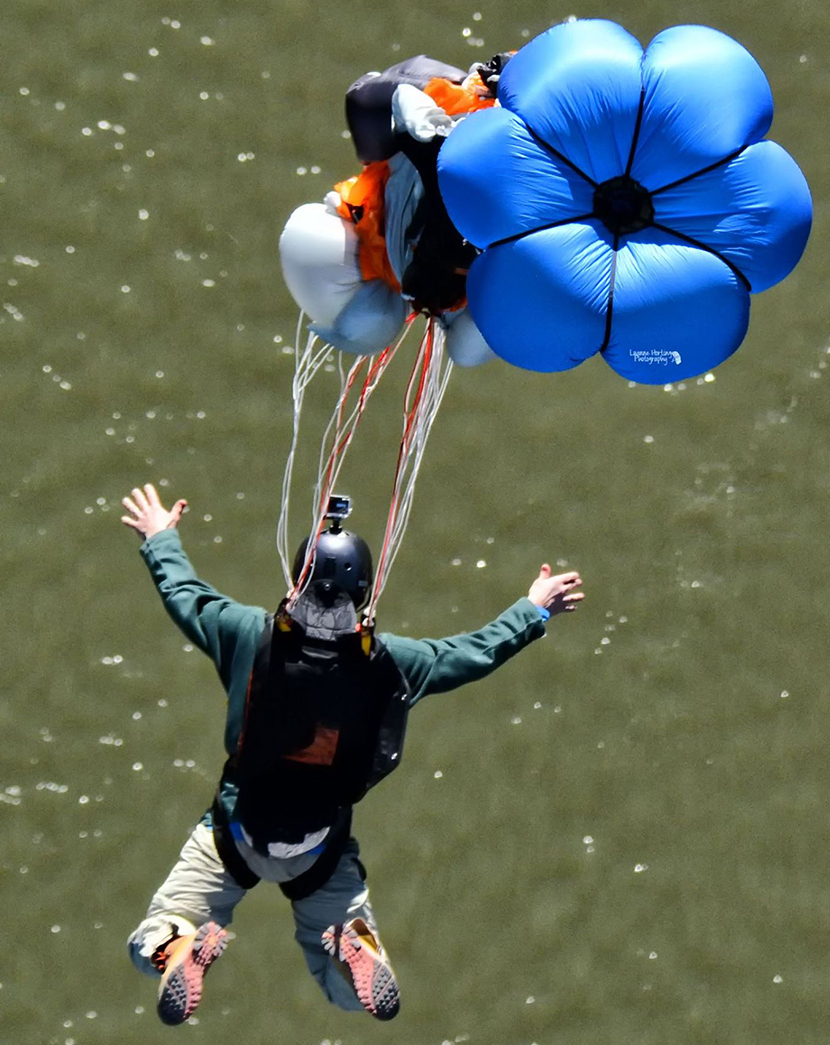 “If you don’t have the appropriate pilot chute for your jump and you don’t adjust your delay accordingly,” Todd says, “You might not like the results. If you were going to extremes in exposing a big pilot chute to a lot of airspeed, you would be stressing out parts of the canopy and your body. For instance: if you should really be using a 42 but you have a 46, you’d better go a little short on this one and enjoy the view from under canopy a little longer rather than taking your normal delay for that jump. I know you don’t want to, but that’s the pilot chute you’ve got.”

“Also keep in mind,” he continues, “That we have seen peculiar behavior when some large pilot chutes are jumped slider-up. You can get some pretty weird interaction if you do that; the slider just seems more reluctant to come down. Personally, I think it has to do with the distortion that the canopy went through during line stretch; at any rate, we do not recommend it.”

“If it is your local object and you’ve really got things dialed in, I can see downsizing,” Todd says. “But if you’re a visiting jumper, you’re going to probably need to treat it a little differently. For example: If all the locals are using a 46, I’ll probably be using a 48 to stack the cards in my favor. If I make enough jumps there to become comfortable with the surroundings, I can see transitioning down to the 46.”

“At the end of the day,” he insists, “You have to remember: In BASE jumping, really small changes in performance do matter. Make sure you’re prepared.”